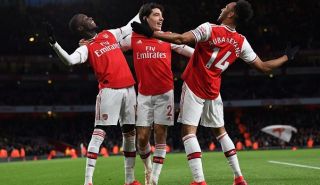 Bellerin: Injury helped me grow but it’s time to play

Hector Bellerin has opened up to the Arsenal official website this week, revealing all about his time on the sidelines, and unlike many before him, he has made good use of his time out.

The Spanish international has been a regular first-team player for us since making his Champions League debut back in 2014, taking full advantage of the injuries to both Calum Chambers and Mathieu Debuchy and never looking back.

Fast forward a few years and he remains a key first team member, but after playing heavily in the early days of his career, he now picks up quite regular knocks which hampers his playing time.

The Spanish defender has now revealed all on his latest time sidelined, revealing that it actually helped him to grow as person, as well as making him appreciate his love of football much more.

Bellerin said: “Before, it was just part of my work and I never really appreciated it. Then I realised that I had played almost 200 games for Arsenal, won four trophies… so many achievements.

“I could never really enjoy those and it made me realise how far I had come since my first game against West Brom in the League Cup, and how much I’d grown in that time – I didn’t even have time to realise that.

“For me, it literally affected everything. Football is my life and all of a sudden when you can’t do the one thing you love for a period of nine months at least, it puts other things into perspective and it makes you appreciate the more mundane things in life a bit more.

“It was the first time I could spend more than two weeks in my hometown. I was there for more than a month when I was going through rehab, and I could appreciate the things that I used to do back then which I can’t do anymore because I’m not there. It made me appreciate my family because they helped me through the process, my friends in Spain that I hadn’t been able to spend much time with since I was 16.

“There were also other hobbies that I kind of left behind. I used to draw a lot when I was young, and that was my time for me to do that again. I picked up photography again, as that was something I loved, and I was just able to explore it a bit further. I had a chance to study a little bit, to read books that I never thought I had time to read.” (Find the full interview here)

A happy player, and a content person in life can only help a person to be better within themselves, and hopefully that will transfer onto the pitch.

Bellerin has been a key player for us for some time, but some of his better performances came in his early years, so it would be refreshing to see a revitalised player come back and push on to become the player we all know he can be.

Was Bellerin better in his first two seasons than his last two seasons? Can he push on with his newfound positivity and nail down his spot in the team?