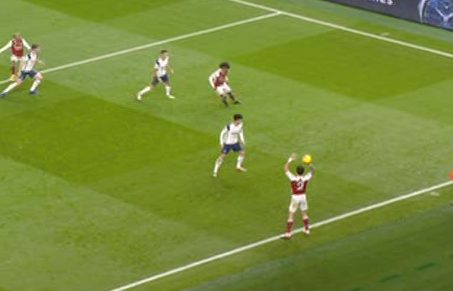 Elite level Football isn’t the easiest sport to play but some things are simply the basics of the game that are taught to youngsters in football academies around the world.

A player who graduated from Barcelona’s La Masia academy is the last person that you would expect to make a foul throw, and when he had done that five times after just 11 rounds of league games this season, you wonder what is going on.

With tension high in the north London derby on Sunday, Arsenal’s Hector Bellerin made his fifth foul throw of the Premier League season.

To put it in some context, in the whole Premier League, only 16 foul throws have been made this season at the time of writing this and Bellerin has made 5 of them.

When he made the foul throw against the Lilywhites, Gary Neville was on commentary duty and he joked as quoted by the Sun: “It was 1986 when I last saw a foul throw.”

He probably hasn’t watched Bellerin for much of this season then.

The Spanish midfielder was terrible in the game as he offered very little going forward and he was left exposed by Son Heung-min running in behind him all game.