Gary Neville was full of praise for Arsenal’s right-back Héctor Bellerín on Monday Night Football and it’s understandable why after his recent performances against both Manchester City and Aston Villa.

Opta powered fantasy football game www.oulala.com have taken a closer look at the 19-year-old’s season so far and the stats impress. The Spaniard has started five of the seven league games that he has featured in, completing a total of 500 minutes. 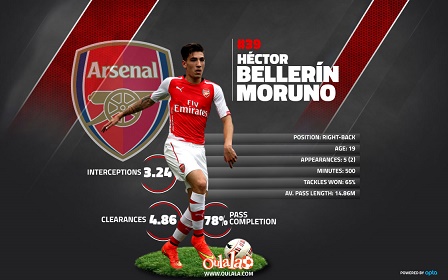 Over his seven appearances, Bellerín’s pass completion of 78% falls just short of Arsenal’s overall 84%. His 65% success when tackling far exceeds fellow club right-backs Mathieu Debuchy 47.4% and Calum Chambers 48.5% this season.
His impressive defensive stats continue with 3.24 interceptions and 4.86 clearances per 90 minutes. Bellerín has outshone both Chelsea right-back Branislav Ivanovic and PFA Team of the Year 2013/14 right-back Séamus Coleman of Everton this season. Ivanovic has 1.09 interceptions and 4.3 clearances while Coleman has 1.15 and 3.66.

In Arsenal’s 2-0 away win over Manchester City the right-back had 44 touches with a pass accuracy of 72.2% after making 18 passes in total. During the game he completed 6 interceptions and 7 clearances.

Against Aston Villa in Arsenal’s 5-0 victory the 19-year-old has a pass accuracy of 71.7%, completed 46 passes and had 65 touches overall. He supplied 5 crosses and had one shot on target, scoring Arsenal’s fifth in injury time.

It’s still early but the stats suggest that Héctor Bellerín is definitely one to keep an eye on in the future.

Which positions do Arsenal need to strengthen this summer?
17 February 2021, 9:00