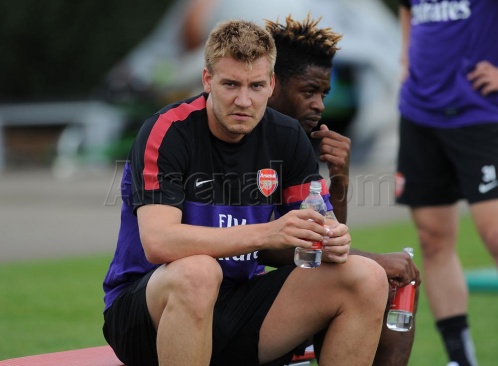 Bendtner confirms that Wenger always put Arsenal above any all else

Summer of 2013 was a good summer for most but not where Nicklas Bendtner was concerned.

Finding himself clearly falling down the pecking order behind the likes of Olivier Giroud, Lukas Podolski, Theo Walcott, and even Gervinho, he was looking for a way out of the club to try to revive what was left of his career.

So, on he went searching for the new challenge that awaited him, and as always with Arsenal, leaving it late for ins and outs, he was on the verge of joining Crystal Palace on deadline day, but right at the 11th hour, it collapsed.

Speaking to the Arsenal, “In Lockdown” podcast, Nicklas was reminiscing on his time during that summer:

“I was very happy going to Palace. We were sat four days before the transfer window closed and I had agreed the move and everything, I was just waiting to see if Arsenal could bring in another striker. But unfortunately, they couldn’t and I had to go back the next day.”

So, as the deal collapsed Bendtner had no choice but to come back to the club:

“(Arsene and I) had a heated discussion on the phone due to me not wanting to come back and wanting to sign for Palace, but he couldn’t let me go because he was thinking of the club and team, so he was right and I was right in brackets, if you know what I mean. In that time the ideal situation would probably have been if they got another striker and I could have moved on to Palace, but that’s also sometimes those career-defining moments. If I would have gone there, the situation would have looked a lot different.”

Despite the doom and gloom for that period, Nicklas managed to put it behind him and force his way into the first team:

“I came back to Arsenal and I was part of the team for six months until I scored a winner and got injured with my ankle and then from that moment, I didn’t go and play with the first team again.Obviously it was very difficult not being part of the matchday and just waiting to move, but I have huge respect for Arsene and I think he was an amazing manager and what he did for the club, a club that I’ve always loved, was phenomenal. The way he was thinking, I can look back now and say he never did anything for himself. He always did everything he could for the club with his mind and what is best for the club, and that’s very admirable. He wasn’t afraid of taking big decisions in the greater good and I think that’s one of the top traits as a top manager. Even though we had a disagreement, I have tremendous respect for him and what he’s done.”

A huge revelation by Bendtner just goes to show that you never really know the full ongoings in a club until someone speaks out, but one thing we can learn from this if we didn’t already know is that Arsene Wenger was not a selfish manager and always put the club before himself. Was this the best way to manage or should he have been more of a Mourinho type of manager. Would that have got us more successes? We will never know but one thing that can’t be doubted is the love and respect Arsene has for our club. Gooners?