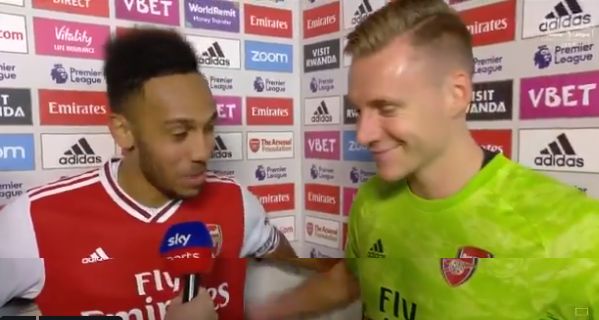 Bernd Leno has offered Arsenal fans some hope as they look to keep hold of their club captain, Pierre-Emerick Aubameyang.

The Gabonese attacker has been attracting the attention of some of Europe’s best sides for some time.

Barcelona has the strongest interest in the attacker with recent reports claiming that the Catalans have him as their plan B should they fail to sign Inter Milan’s Lautaro Martinez.

Inter Milan is also targeting him as a replacement if Barcelona triggers Martinez’s release clause.

Bernd Leno became the latest member of the team to answer questions on the attacker’s future and the German tried his best to keep the fans hoping for the best.

He admitted that he wasn’t one of the people who makes these decisions at the club, but he added that he thinks his teammate would remain at the Emirates.

When asked about the player’s future, Leno said as quoted by the Metro: ‘I’m not sure, it depends who’s going to leave and who stays. I don’t know.

‘I think it depends if Auba signs a new contract or [if] he leaves. ‘I don’t know what they are going to do.

‘But if he leaves, of course, you need another player. ‘But I think he’s going to stay.’

So, Leno thinks he will stay, let’s hope he is right.