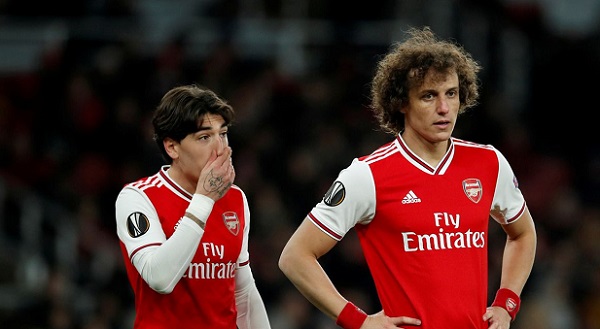 Hey. It was a very painful Sunday here. I don’t know about yours. I’m not even going to try and act like I have any more to add about the loss to Tottenham. Awful display, that’s all.

Onto my topic, let me start by defining what I mean by ‘blame game inertia’. I don’t read a lot of stuff on other teams’ forums, so I don’t know how exactly they behave. I do spend a lot of time on Arsenal fora and I have noticed one thing. We play the blame game a little too much. It’s sort of becomes a failsafe switch. We all know who to blame; Xhaka, Mustafi, Luiz, Laca, Bellerin, Kolasinac, Willock. If any of the ones “we like” screws up, we still blame the other guys for the screw up. It’s as though they somehow have to score every game to prove themselves.

I am not saying all the players above deserve to be starting in the Arsenal team. Far from that actually. Nevertheless, if they could play better, I’d be more than happy to support them.

I hope that paints enough of the picture.

Let’s start with yesterday’s game. Most of the comments in the match reactions post pointed fingers at everybody else, except those who might have actually done badly.

Let’s start with Hector Bellerin. To be honest, some of our best attacking play yesterday came from him. From his variation of play and unpredictability, he caused two big chances. Unfortunately, they were not scored. Somehow, he was at blame for the loss yesterday in the eyes of some. Take into account, most of his attacking contributions came from him actually displaying some skill to beat a man on the dribble and get himself into attacking positions. He’s innocent but since he’s always been blamed, he still has to stay blamed.

Let’s look on the opposite flank. In my view, Tierney had a really bad game. He didn’t have much to do defensively, Mourinho didn’t even try to attack on that side. Right from the first minute. He didn’t even play an attacking player on that side. That’s how much he didn’t bother, and yet, I can’t seem to remember KT create a single attacking moment. Even as he was getting really good service from Xhaka. I was pulling my hair out at a particular point where Xhaka played a pass to Tierney way behind Aurier. It had enough pace that he didn’t even need a guiding touch. You could clearly see that Xhaka was setting him up to cross, because at the moment Xhaka plays the pass, Laca is making a run into the box, Auba is arriving near post and Pepe is arriving back post. What does KT do? He controls that ball, for some reason spins around, tries to accelerate, and ends up running the ball out for a throw into Spurs. If you watched the match, you’ll notice that Xhaka repeatedly set up Tierney to cross, but Tierney ended up doing something I can’t define. Now let’s compare. Bellerin actually had to contend with Moura and created more attacking action than KT. End of the game, Bellerin gets more blame than KT. Blame game inertia.

Moving inwards, Granit Xhaka. I saw an argument from someone on a previous article, that started by blaming him and a few others for failing to control the midfield. Let’s realistically look at the game though. Spurs were playing with long balls. How exactly is a midfielder who was instructed to press high up responsible for losing a long ball battle? It was his pressing that gave us the lead – but no. We lost, so he’s somehow to blame. How about the number of times he kept splitting Spurs with passes to find strikers, but they couldn’t control or make use of them? The strikers get no blame for that. “Most of his passes are sideways and backwards” Most of his passes were through passes that were wasted by KT, but people are used to that blame line they saw on Sky Sports at some time, that they actually have to keep carrying it, even when it’s not relevant. Someone used the line “he’s always giving our opponents chances to score” the last time he did that was on 01/09/2019. Think about that.

David Luiz. Let’s start by ascertaining my general position on him. He should be on the bench. Nothing more. However, what did he do wrong yesterday? He was put in a bad place by two passes, one of them from Martinez in the box. But we still blame Luiz somehow. Blame game inertia.

Auba. This is one of those we like. Rewind the clock to the Leicester City game. Laca missed some really difficult chances and was roasted on here. Forward to today, Auba misses two more clear cut chances. Nah. We just gloss over that like it didn’t happen.

The point of this article is to show Arsenal fans that we need to apportion blame based on performance, not based on emotion. The entire left side of our pitch didn’t even operate yet Spurs were not attacking through there. And yet most of the blame fell on the right side of the pitch where Spurs had attacking players.