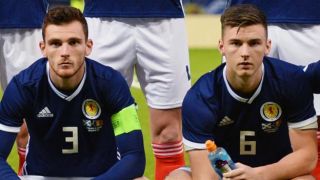 Liverpool have a bit of an injury crisis emerging at present, just in time to take on Arsenal next weekend.

The Reds saw defender Andy Robertson have to be replaced during Scotland’s 2-0 win over Denmark, and was seen to be clutching his hamstring according to TalkSPORT, which will leave his club worried over his availability.

Arsenal’s only worry at present comes in the shape of Thomas Partey, who was unable to feature against Watford just before the international break, but Charles Watts seems to believe he is more likely to make the match than not.

Sead Kolasinac was on the wrong end of a horrific challenge this week, although we don’t believe he would have been in the playing squad regardless of him proving fit to feature, which appears unlikely on viewing the horrendous incident, so his absence is likely to impact the clash.

Which player will Liverpool miss the most? Could the absences give Arsenal the edge at Anfield?