Jamie Vardy has made his intentions clear that he is set to stay with Leicester City despite Arsenal’s offer, by changing his Twitter profile picture to him in the new Foxes home strip with the byline “Forever Fearless”.

The England international has been strongly linked with a switch to the Emirates Stadium this week, with reports claiming the Gunners had triggered his £22 Million release clause.

Leicester were claimed to have tried to counter that with a contract offer of their own, and he has today changed his profile picture to one of him in the home strip of his current club, which will be worn next season.

Monday was the deadline given for an answer on whether he would be making the switch, and he appears to have given us a resounding no.

Here is the evidence….. 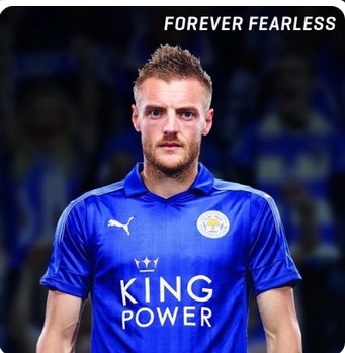 There could be hope that this is a negotiating tactic in an attempt to maximise his profit from the saga, be it with a bigger contract with the PL champions or with Arsenal, but either way, it is a huge response to the current speculation.

The striker jetted off to France today to play his part in England’s European Championship’s campaign, and looks likely to play off of main striker Harry Kane in either a 4-4-2 or 4-3-3 formation.

We are also linked with a move to sign Alvaro Morata this summer, and the other hope is that proceedings for his signature have advanced, making the bid to sign Vardy null-and-void.

Would you prefer Morata to Vardy? Could the England star be trying to bargain with the frugal Arsene Wenger? Or has he simply closed the door on the idea of switching clubs?

Who would you want at Arsenal?