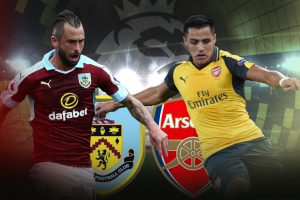 Last week’s win against Tottenham was hugely important for Arsenal, not just for beating our biggest rivals but because the three points took us right back into contention for the Top Four of the Premier league. Looking at it from that perspective, today’s game at Burnley is just as important as we face another rival at the top of the table.

The hugely improved Clarets are equal on points with us right now, and have an excellent home record in this campaign, and if you look at these results you can see just how hard they have become to beat at Turf Moor.

This could be an even bigger test for the Gunners than last week’s derby given our two tight matches against Burnley last season and our abysmal form away from the Emirates this season….

But one factor in our favour is that we always beat Burnley somehow and other than a League Cup defeat in 2008 we haven’t lost to them in the League since 1974. This is the only bright statistic I can find for this game!

So all in all this looks like it is going to be a fascinating contest, and like last week there are few people predicting an Arsenal win which always gives me a little more confidence.

There are few fans that doubt that last week’s starting XI against the Spuds is probably our best team, and with no new injuries Wenger can stick with our most impressive line-up. I really can’t see him making any changes for this game, so this team should be very easy to predict, especially as none of our reserves covered themselves in glory in midweek…

Here is the very simple prediction….

But despite most people’s reservations, I still think that this team is more than capable of beating Burnley into submission. All we have to do is make sure that the team plays with the same heart and desire as they did last week.

Although Burnley rarely concede at home, I am going to stick my neck out and predict a 2-0 win for the Gunners.