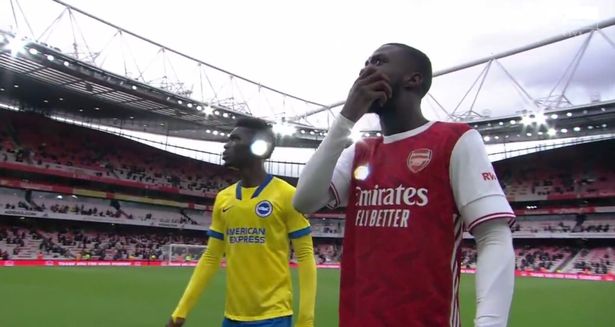 Kevin Campbell insists that he’s been informed that Brighton midfielder Yves Bissouma is keen to make the switch to Arsenal.

The midfielder has been the standout star for his side in guiding them to safety in the Premier League this season, and is attracting attention from a number of bigger sides.

The Gunners have been the most strongly linked in recent months however, and that speculation will certainly not have gone away after his visit to the Emirates on Sunday, where he was seen talking to Nicolas Pepe about their surroundings at full-time.

The two players are former team-mates from their time in Lille, another reason behind the thinking of the move, while former Arsenal star Kevin Campbell is hearing the player is keen to make the move.

“I am hearing that he wants to come to Arsenal,” Campbell told the Highbury Squad. “That’s what I am hearing.

“So, Arsenal have got to make some moves and get him. I don’t know if you saw it at the end of the game. Him and Pepe were there talking.

“And I think Pepe was just talking him through the Emirates. You go through that door at the top. You got down the side there and there’s a bar. Your family will be up in that box. My box is beside it.

While the player may have set his sights on a move to our club, TheSun‘s claims that his current owners are supposedly in want of £40 Million for his signature could hamper the deal.

“By and large he did OK” Ex-Gunner defends Arsenal man despite his error against Liverpool
24 November 2021, 10:30