Can Arsenal Take Advantage Of The Slavia Prague Circus?

Arsenal might have their own injury concerns, but we have benefitted from a bizarre situation involving Slavia Prague’s Ondrej Kudela.

Officially, the defender will miss the first leg due to a fever, the club announcing that minutes before UEFA then banned him.

The Club will never admit this nor will newspapers but there is a conspiracy theory that this ‘cold’ has been exaggerated to keep the 34 year old from entering the UK.

UEFA and Police Scotland have launched an investigation allegations that the centre back racially abused Ranger’s Glen Kamara in the last round of the Europa League, with lawyers suggesting Kudela will be questioned by the police the moment he sets foot in Britain. 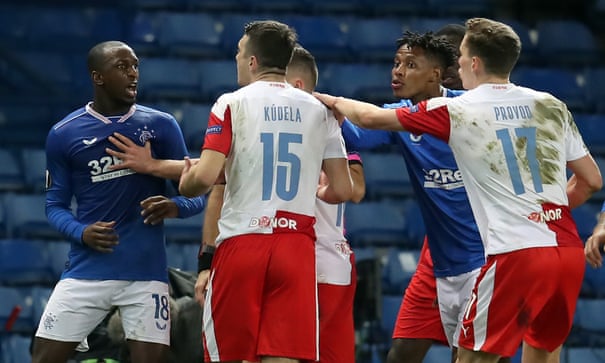 Like most Football fans we only really focus on what happens in our own country, but this is serious news in the Czech Republic. So much so that Prague tried to refuse their player travelling to Wales on International duty based on ‘security fears’.

At the last minute, the player reversed that stance and did play in Cardiff, although there are rumours that was after confirmation that Kamara’s lawyers were not prepared to travel to the Welsh Capital, having already planned to take legal action in London knowing he was due to play at the Emirates this Thursday.

Ironically, it was on the pitch where he wasn’t safe, taking an elbow on the nose from Gareth Bale. It’s that blow that is now being used as a reason for ‘nasal contusion’ and a reaction to antibiotics.

It’s believed Slavia, who deny the allegations, are exaggerating the injury to protect the player, knowing he was about to get hit by a one game provisional ban.

Their president has accused the Scottish Champions of ‘biased pressure’ and ‘xenophobia prejudice’. The accusation is Prague knew a ban was the likely outcome but believe they are taking control of the situation by simply saying it’s their choice the player is not playing in midweek and nothing to do with guilt.

I should stress that a ‘provisional ban’ doesn’t mean UEFA have reached any conclusion. Their policy gives them a right to ban any player for up to 90 days while fact finding if they feel it’s convenient.

From the Gunners perspective Slavia Prague are not a good enough team to be losing talent. He’s an experienced leader in their dressing room and vital at set pieces in both areas.

They say to win a trophy you need luck that you can’t control and this could be it.

Slavia Prague have put a spotlight on them and because of a situation where they claim to be the victims, they now are without one of their best players in North London.

Rangers’ fans have been quick to give their theories to why someone conveniently can’t travel the week a lawyer wanted a chat and to be fair, many were predicting the moment he went down holding his face in Wales that he wouldn’t be in London this week.

This is becoming a circus that is going beyond Slavia Prague. It’s put a spotlight on the Czech Republic’s tolerance to racism and is becoming a huge national story

In other words, it’s a massive distraction.

The club have been so keen to fight Rangers they may not be focused on Arsenal.