I was kindly sent a copy of a book written by Tony Kokkinos called “Caviar and Sausages: Arsenal in the Time of Wenger” and asked to review it.

The subject is Arsene Wenger’s whole tenure in North London detailing every season of his 22 years in charge of Arsenal.

Where some gooners break Wenger’s reign down into two parts, this editor divides the Frenchman’s journey into three periods – the Glory Years, the Austerity Years and the Stagnating Years.

In 1998, Arsène Wenger reacted to Arsenal fans’ groans by famously saying, “If you eat caviar every day, it’s difficult to return to sausages.”

For those who lived it, it’s fun to reminisce about happier times. For those slightly newer to following the Gunners, they could benefit from being educated about the job Mr. Wenger did in England.

If you’re not old enough to remember, graphs will show you who was our first 11, top scorer, etc. yearly.

Of course you know the story has an unhappy ending but that can’t be blamed on the writer.

I can’t stress enough that this is more than a Wikipedia entry of a quick summary of the 22 campaigns of our greatest ever manager. The level of detail is amazing, fresh with graphics and anecdotes.

There is a key system where certain icons represent their own meanings.

It’s like the author has every paper clipping from 1996 – 2018 or simply is an avid fan with a photographic memory.

It’s worth stressing that the editor grew up in Islington, attended his first live match in 1977 and was present at Wembley for the ‘Five Minute Final‘ so is passionate about what he writes about.

A lot of patient research has gone into reviewing each season, such as 9 players missing pens in one campaign or no player in Prem history getting more red cards then Vieira.

Credit to him for being impartial while presenting facts, it’s hard to discern if this is a man who was in the ‘Arsene Out Brigade’ or thinks the 62-year deserved better.

It’s simply factual for example that at one point Mr. Wenger was the master of finding value in the market and turning potential disaster losses into positives, e.g. how he replaced Petit, Overmars and Anelka.

Nor is it inaccurate to stress how many talents he taught new positions to, such as turning Lauren into a right back or Kolo Touré a centreback.

Nor how having to play early Champions League fixtures at Wembley was the first indication that we could fill a bigger stadium then Highbury but equally couldn’t replicate that atmosphere.

He does give his point of views in terms of signings he feels were good, bad or quite simply strange.

Lists like this are a nice extra touch, as are memorable Wenger quotes which at his very best are gems.

When asked once had Spurs closed the gap on Arsenal. he gave this response, ‘last time I checked, they were still four miles away and 11 titles away.’

I personally liked information gathered that proved how much he did to make an ageing defence better on the ball and healthier off the pitch, challenging the long myth that he simply was lucky to inherit a good back 5 (he had built an entire new one by the time we went unbeaten).

I see myself as being knowledgeable about Wenger, so was happy to hear stories I had never heard before (Petit taking a taxi from Spurs to Arsenal during transfer talks) or the time that Wenger ‘lost his rag at half time’, also sad stats such as Bergkamp refusing to ever take a penalty again after the 1999 FA Cup Semi Final.

Stories newer fans will find insightful are included, such as the day Ian Wright argued with fans at Highbury, or Arsene Wenger confronting reporters due to mean spirited rumours.

There are thought-provoking snippets such as how Diawara would have become a cult hero had he not hit the bar and had a shot cleared off the line at Elland Road on the night we surrendered our initiative in the 1999 title race.

Anyone who can take time to reference a player who only ever made three starts, you know hasn’t rushed their work.

It’s always fun to read how Stepanovs passed a trial.

There’s less details about controversial topics such as Anelka’s departure, but maybe it’s smart not to revisit tales your audience will be aware of.

It’s strange to read that 2nd was once considered an underachievement.

One small complaint would be that the writer fails to stay impartial when it’s time to call a spade a spade.

Newer fans are left thinking that there was a constant conspiracy against Arsenal and that the Gunners never benefited from a dodgy official’s decision (Pires dive against Pompey, Eboue dive in the CL Final).

It doesn’t make you less of a fan to admit that sometimes your team made a mistake (Battle of Old Trafford, Pizza Gate, etc.).

The writer goes with the policy that he feels he can’t write anything negative about Arsenal, which as someone who lived through Mr. Wenger’s entire tenure isn’t factual (and not realistic when you use common sense.)

But I must say that Tony’s effort and attention to detail is very good.

You can’t help but read about the glory years and get sad because you know what’s coming.

In that sense it’s like reading a great fairytale but in the back of your mind you are aware that it ends sadly.

If there is a moral of the whole piece, it’s that it’s best to appreciate what you have and don’t take anything for granted.

Well worth the read in my opinion….

WIN A COPY of CAVIAR AND SAUSAGES from JustArsenal

Just give me your score prediction for Arsenal v Inter Milan next week in the Florida Cup. In case of a tie, please also predict what min the first goal is going to be scored. 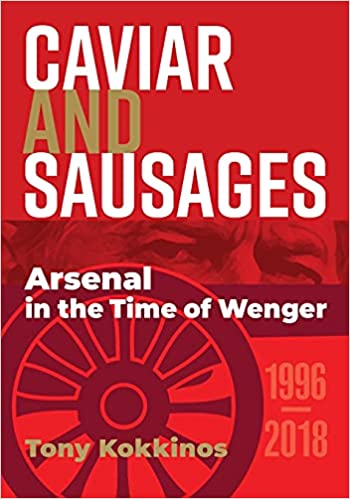 You can purchase “Caviar and Sausages” at Amazon on this link.