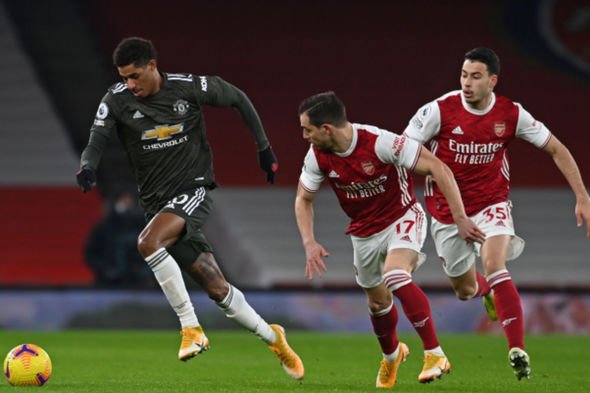 Cedric Soares made Ole Gunnar Solskjaer eat his words after the Norwegian doubted his defending abilities.

Manchester United and Arsenal faced off in an intense league game at the Emirates last night. The game ended in a stalemate.

Mikel Arteta was without Kieran Tierney again, and he had to use Cedric Soares as his left-back.

The former Southampton man is an accomplished right full-back, but he had to fill in for Tierney, and he did well.

However, during the game, United manager Solskjaer was heard telling Marcus Rashford that the Portuguese international couldn’t defend.

He yelled in the first half, as quoted by Metro Sports: ‘Marcus, he cannot defend. Take him on if you want.’

The attacker tried his best to get the better of the full-back, but Soares repelled him.

In the end, United had to sub the striker frustratingly as he couldn’t get something from the game, while the fullback enjoyed a fine outing despite playing out of position.

Hector Bellerin struggled to get forward on the opposite flank, and that could see him lose his place to Soares when Tierney returns for the Gunners.

It remains to be seen if Tierney will be fit for Arsenal’s next game or if Arteta will keep Soares in the team.