Celtic has emerged as the leading side in the race to sign Wigan’s Kyle Joseph.

The 19-year-old has become the next star for the Latics to attract the attention of top European teams.

He broke into their first team last year and has been a rare positive in a team that has gone into administration.

Arsenal has been tracking him since he started making waves in the team and the Gunners have been planning to add him to their youth side.

They are not the only team linked with a move for him as Tottenham, Celtic and Rangers have also been in the race.

However, Mail Sport says Celtic is in the strongest position to sign him as they see him as a replacement for Odsonne Edouard.

The Frenchman is expected to join a Premier League team in the summer and that would leave the Hoops with a huge goal-scoring gap.

They have now identified him as one player who could step up to take the place of the Frenchman.

The attacker will favour a move to the former Scottish champions because Arsenal only wanted him for their Under23 side.

The Gunners will now have to turn their attention to their other attacking targets ahead of the transfer window. 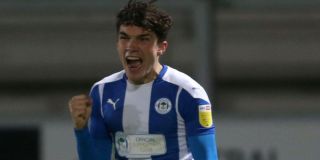