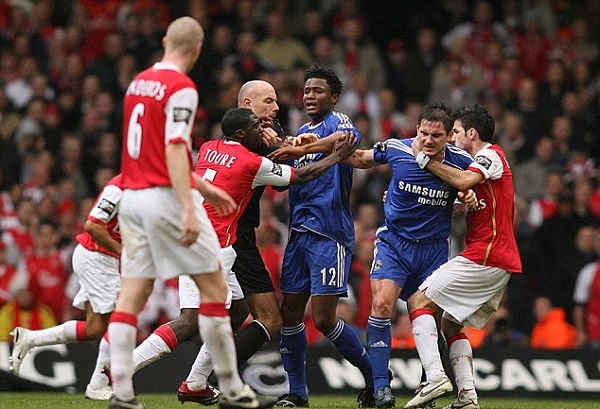 Cesc Fabregas has shown again just why he is loved by both the fans of Arsenal and Chelsea.

The Spaniard started his career with Arsenal before leaving the Gunners to return home to Barcelona is 2011.

He, however, struggled to stay in Spain and he wanted a return to the Emirates, but Arsenal turned down the chance to re-sign him.

He would eventually join Jose Mourinho’s Chelsea and help the Blues to win another Premier League title.

He angered some Arsenal fans when he left for Barcelona and angered them, even more, when he moved to Chelsea, but most of the club’s fans understood his decision to join another London club as the Gunners didn’t want to sign him at the time.

A Twitter user recently posted a clip of a brawl from Arsenal’s League Cup final game against Chelsea in 2007.

The Blues won the game after Didier Drogba scored the winner for them, but there was a scuffle between both sets of players which was initiated by Mikel Obi and Kolo Toure.

Fabregas was in the thick of the fracas but he sees the bright side of it now as he commented on the video claiming that it was a show of passion.

He Tweeted: “I shouldn’t be saying this but moments like this sometimes makes football even more special. Proper passion for wanting to win even if it’s not always possible.”

Arsene Wenger reveals why Fabregas wasn’t granted a return to the Emirates
16 October 2020, 20:00