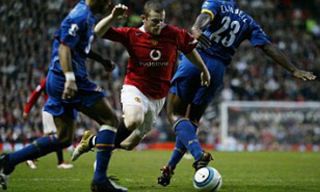 Cesc Fabregas has revisited the game that Manchester United ended Arsenal’s unbeaten run and he revealed the wide range of emotions at the manner in which they lost the game.

The Gunners had been unbeaten in 49 games before they visited Old Trafford, both teams kept having a go at each other until after the 70th minute when Manchester United was controversially awarded a penalty after Sol Campbell was deemed to have fouled Wayne Rooney (he dived).

Fabregas was speaking to Rio Ferdinand, and the Spaniard claimed that Rooney had dived for the penalty that was converted for the first goal and he also claimed that Manchester United defenders had targeted Arsenal’s dangerous players.

He specifically named Gary Neville for how he persistently fouled Antonio Reyes and got away with it.

‘We were so disappointed. We were angry, we were upset,’ he told Rio Ferdinand’s FIVE YouTube channel.

‘It had to come to an end, the 49 games, it can happen at Old Trafford against a great Man Utd side. But I think it’s the way it happened.

‘First of all, Gary Neville, what he did to Antonio Reyes… mamma mia! But every single time he had the ball! Wayne [Rooney] dived for the penalty against Sol [Campbell].

‘The emotion was that we had lost against a great team, which can happen, but we didn’t feel we should’ve lost. We didn’t feel it was the right time to lose our invincible run. Everyone was really, really upset.’