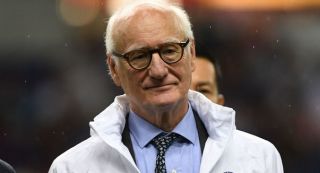 Chelsea chairman jumping the gun with some transfer “advice” for Arsenal.

After seeing his beloved Chelsea star, Tammy Abraham scoop two awards on the night at the annual London Football Awards, Chelsea Chairman Bruce Buck has a bit of advice for Arsenal and Tottenham.

The Blues have been London’s top team in the Premier League this season after sustaining a top-four spot for much of the campaign.

Their form helped Tammy Abraham, who has 15 goals for them this season, to scoop two awards on the night.

He beat Pierre-Emerick Aubameyang and Heung Min Son to be named Premier League player of the year and he also beat the likes of Gabriel Martinelli to become the Young Player of the Year.

Abraham has been a shining light in what has been an inconsistent season for the Blues, but they remain fourth on the Premier League table and they recently beat Liverpool in the FA Cup to reach the next round.

Buck reckoned that a transfer ban could have been the catalyst for Chelsea’s success this season and he jokingly advised Arsenal and London teams to look for one themselves.

“The nominees show a transfer ban is a very good thing,” Buck joked per the Express.

“In fact, I recommend it to all of the London clubs.”

The Blues’ ban has been lifted and the first player they signed after the lifting is Hakim Ziyech who will join them next summer.

This sort of banter from a club chairman is a little premature, Chelsea are on the verge of being dumped out of the Champions League in humiliating fashion, they are in no way guaranteed a top-four spot and their arrogance may yet backfire on them before the season concludes.