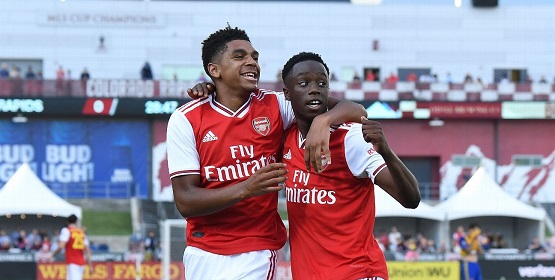 The first of Arsenal’s pre-season tour of the USA was played at 2 am this morning (UK time) and it was a a simple promotional game against another one of Stan Kroenke’s franchises, the Colorado Rapids.

Kroenke put out a very young team, with the only senior players on show being Carl Jenkinson and Calum Chambers, although there were many pleased to see Saka, Nketiah and Medley looking to impress the boss ahead of the new season. And of course it was also a perfect chance for us all to see our exciting new signing Gabrial Martinelli.

It was a stroll for our young team and Saka put us ahead after just 13 minutes and James Olayinka doubled our leader just 15 minutes later to put us in a very comfortable position at half-time. The highlight of the second half was seeing our debutant Martinelli make it three on the hour mark.

Obviously we will see more of our regular senior players when we face Bayern Munich in just two days time, but we did see cameos from Lacazette, Ozil and Aubameyang in the last 15 minutes last night.

Watch all the action below to give you a taster for an interesting week ahead of us….