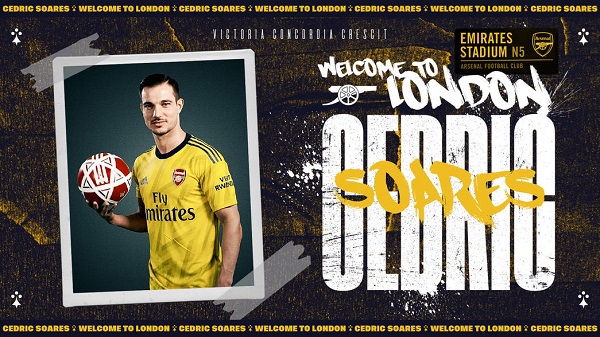 Arsenal has completed the transfer of Portugal international Cedric Soares from Southampton.

The fullback becomes Mikel Arteta’s second signing this month after the arrival of Pablo Mari from Flamengo.

Soares had just six months left on his current deal at Saint Mary’s’ and he had fallen out of favour with the south coast club.

He played the second half of last season at Inter Milan but the Italians decided against making his loan deal permanent.

Soares joins Arsenal on a six months loan deal for an undisclosed fee and he has the chance to earn a new deal when the season finishes.

Hector Bellerin has been the only natural right-back at Arsenal this season but the Spaniard has just returned from a long injury layoff and he is still trying to find his rhythm.

Soares is expected to help Arsenal reduce the reliance on Bellerin and he should be a capable deputy who can also play as a left-back.

Soares won the 2016 Euros with Portugal and he was also their right back as they won bronze at the 2017 FIFA Confederations Cup.

He is seen as a temporary solution to Arsenal’s defensive issues with Mikel Arteta planning to make major signings in the summer transfer window, but he can play his way into a long term future at the Emirates if he proves his worth on the field of play.

This may not be a marquee signing but it does fill a gap and increase Arteta’s options. All in all, not a bad deal.