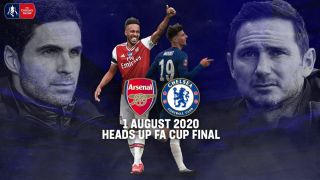 Arsenal can be thankful to come into today’s FA Cup final without any new injury worries, having lost so many players since the return to action, but Chelsea on the otherhand have some doubts.

The Blues have been without Marco Van Ginkel and Billy Gilmour for some time now, but they currently have doubts over two of their most influential players in Willian and Ngolo Kante.

Arsenal remain without the likes of Calum Chambers, Pablo Mari, Shkodran Mustafi and Gabriel Martinelli, but may well welcome goalkeeper Bernd Leno back into the playing squad.

The German has been nominated on a three-man shortlist for Arsenal’s Player of the Season, but even if he does prove to be fit, I feel like Martinez will still get the nod to start after an impressive few weeks as number one.

I feel like Maitland-Niles might be given the task of keeping tabs on Christian Pulisic, who is proving to be a handful for our rivals in his debut campaign. Having Bukayo Saka on the alternate flank would also allow us to switch wing-backs without issue in case Chelsea were to move the American to the right in the absence of Willian.

The front-three more-or-less picks itself, with Nicolas Pepe having begun to show why he was worth his hefty price-tag in recent months, while Laca has seriously improved his form in recent weeks since getting regular minutes.

This game will not be an easy one to win, but if we keep organised in defence we certainly have a great chance against the Blues.

Do you think Ceballos should get the nod over Torreira? Who else deserves to start ahead of my selection?