You would think there was an air of depression around Arsenal at the moment with all our injury and after the humiliation in Munich last week, but the fact is that the Gunners had a brilliant October, including the massive win over the so-called “unbeatable” Bayern Munich.

Arsenal also had wins against Manchester United, Watford, Everton and Swansea City to make a clean sweep in the Premier League (we won’t mention the reserves getting massacred at Sheff Weds!) and took us up to joint first in the League table, and Arsene was more than happy to pick up the trophy. “It is always good, Wenger said. “because it just reminds you that – especially after a defeat like we had on Wednesday night [5-1 Champions League defeat to Bayern Munich] – we have not done too badly in the last month,”

“You worry as well about maintaining the run for coming months. That is what we want to do always.” 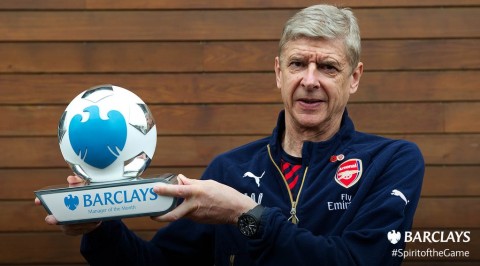 “We had a difficult start against West Ham and after that we have responded very well and are now on a good run. Our target of course is to maintain it.”

This run was even more special because of the quality of our opponents, but November should be a little easier once we get some players back after the international break….