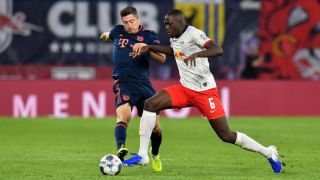 Recent reports appear to claim that Liverpool are closing in on the signing of Arsenal target Ibrahima Konate, but RB Leipzig are refuting the deal.

The 21 year-old defender has been impressing alongside Dayot Upamecano in recent seasons, and has attracted a number of potential suitors.

Arsenal are amongst the names to be strongly linked with a potential move for his signature throughout the current season, with the Standard stating just three weeks ago that we were lining up an offer for him this summer.

News emerged this week to claim that Liverpool were already working on their own deal to snap up Konate from under their rivals noses however, with RMC Sport going as far as to say they had completed an initial medical as they look to wrap up his signature early.

RB Leipzig director Markus Krosche has told Sky Sport has moved to claim that he will not be sold to Liverpool however, whilst adding that he still has over two years left on his current deal and he has a very bright future in Germany.

We will obviously have to wait and see if the Reds have stolen a march and moved to convince the defender of a move to Anfield, but all things considered, I’m gonna assume that this is far from a done deal.