This is an article from an excellent Arsenal website (Shewore.com) who have been going for many years and also sell some great Arsenal shirts and original souvenirs which you can browse here.

The reason I am putting this up for discussion is because it was highly praised by one of our regular contributors (stand up Ken 1945 and I agree it is a very thought provoking article, and Ken was keen to hear what our readers thought about it. This is what Ken wrote….

Just read a terrific article on She wore a yellow ribbon – about Arsenal fans boycotting a cup final.
Nothing to do with Wenger, more about fans views.
Wonder if anyone else has seen it and what your views are?
Hope you will allow this Admin, as I think it is a great article and you might want to follow on with an article of your own.
Hope to see some views after its been read.

So are you willing to read it and comment? I did!

Why are Arsenal fans boycotting a final?

I have always found the concept of boycotting Arsenal odd. And I have found the need to tell everyone that one is boycotting even odder. Borderline attention seeking.

You see, Arsenal is a love. Till death do us part. Through thick and thin. The sign of a real fan is those that stick with the club during the bad times, and then can reap the reward in the good.

Manchester City fans are a perfect example of this. They stuck with their side through multiple relegation’s down to League One. They were still getting 30,000+ gates in the 3rd tier of English football.

When they were going to away game in the late 90s to backwater towns like Gillingham in the then Division 2, getting back to the Premier League was a dream. Winning the Premier League the impossible dream. But 13 years after relegation, their fans were rewarded with AGUUUUUERO.

OK, it might not be a Leicester City story, as Manchester City were pumped with dodgy Thai money before the oilmen came in, but who can begrudge the fans who stuck with the club when they were visiting a dump like Luton for a 1-1 draw?

Their loyalty has been rewarded, and I am sure they are every bit frustrated about  the new (mostly foreign) fans who have attached themselves to the club since their success as Arsenal and other clubs are.

I have heard Arsenal fans in the past talk about boycotting “until Wenger leaves”. They do it in almost a boastful way. As if they are saying I am such a great Arsenal fan, that I am sacrificing going as a form of protest. Almost acting like by choosing not to go, they are a superior fan.

Many of those who have boycotted did not previously go regularly anyway, or have moved away from the London (or now have other responsibilities like children). Their boycott is not real. It is an excuse for no longer going. They would not go regardless of the state of Arsenal.

One chap I know who boycotted broke the boycott when he got free tickets at club level. Odd fella.

Another announced on social media at the beginning of the season that he “would not step foot in the Emirates again whilst Arsene Wenger is in charge”. He has been to more games this season then he has in his life.

I remember a fixture against Norwich a few years ago. A fans group attempted to organise a boycott, alongside a protest at Bear’s roundabout. A few fans who do not go to games turned up for the protest. Fair enough. But they then bought tickets to watch the game, taking advantage of their fellow protesters boycotting. All a little bit confusing.

Lets be honest, unless a boycott happens en masse, it is meaningless. And even if it happened en masse, the club would still have 44,000 fans worth of season ticket money for that game, and the remaining tickets on sale would still be sold on the general market. The club would not really care if a single person announces “I am boycotting.” 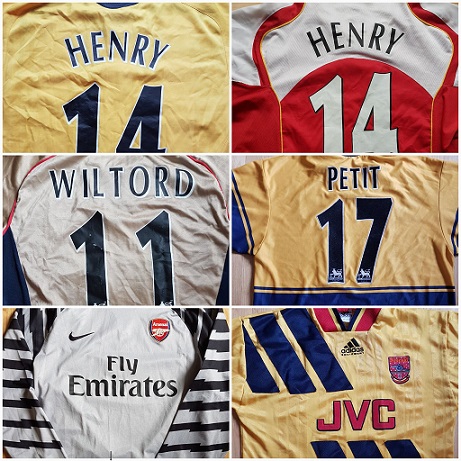 SheWore has 100’s of Arsenal shirts – and signed ones as well! Click on the photo and have a look..

This brings me onto an articles I read by Layth Yousif in the Islington Gazette.

I have read the article a few times and I just do not get it.

Here we have someone who is a season ticket holder, who has been following the club for some years, making the decision not to go to the final. And whilst he attempts to justify the decision, I just do not understand it.

Football is about the moments, the memories, the success. The 3 FA Cup wins in recent years have been brilliant. Not just for the trophy won, but the day out. The early meets with your mates. Breakfast at Breakout. Beers at the Swan. Train journey up. The football. The Blue Check. Train journey back. More beers in Islington. Then home to bed.

The football is just a 2 hour part of a much bigger, much longer day. I remember looking round in the Famous Cock after the victory against Hull City. It as about 11pm. We were broken men. The day had taken its toll. Lads were falling asleep. It was time to go home. This is the reason we go to football. To have a cracking day out with mates old and new.

To deny yourself going to a final, whether it be FA Cup, League Cup or Europa League, is denying yourself the chance of a day out with your mates. A boozy day out. Hopefully a win. But if not, surrounded by people to drown your sorrows with.

If you are not at the game, and boycotting it, what are you doing instead? Gong round Westfields with the misses? Sitting in the Angel with your pint of cheap ale? Feeling sorry for yourself, playing Akon’s Lonely over and over in your head?

No thanks, it is not for me.

Regardless what you think of Arsenal at the minute, of Arsene Wenger, of Stan Kroenke, we have a final to play on Sunday. And the thing with finals is you never know when your next one might be.

For fans to think the League Cup is below Arsenal. Well that is just elitist. It is snobbery. It is BS.

Look at the likes of Aston Villa and Everton. These are big clubs. They have not won trophies for decades. Liverpool have not won a trophy since 2012. Tottenham since 2008. Newcastle for what has to be nearly half a century.

Those turning their nose up at the League Cup, it is just wrong. The next final might be a decade away. The next trophy 2 decades away. You never know what will happen in football. No club has a right to win things.

I always think those who declare that they are not going on Sunday have probably spent a decade moaning that Wenger has disrespected the cups. Yet what are they doing by not going?

To boycott, and almost be proud that you are boycotting, could be something you end up regretting.

If you don’t want to go to a game don’t go, but leave off with this I have to tell everyone I’m not going and then I expect everyone else to actually give two f*cks about it!

Personally, I am already buzzing for Sunday.