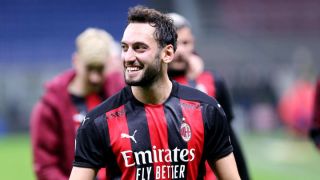 Could Arsenal already have a deal for this brilliant playmaker for free?

Reported target could be landed for free!

Arsenal must hold out just 27 days in the hope of landing one of their reported transfer targets on a free and he won’t be such a bad player to get either.

Hakan Calhanolgu can be deployed as an attacking midfielder and also as a forward and the fact that he is currently with the Turkish national side, preparing for friendlies and for the Euro 2020 opener against Italy, this may just work in our favour.

football-italia.net is reporting that an agreement between both Calhanoglu and AC Milan seems to have stalled and an agreement seems as far away as a holiday without quarantine restrictions.

Reports also suggest that the gap between the offer and demand is too big for both parties, so it is looking ever likely that Calhanoglu will leave the San Siro before the start of the new season.

If an agreement cannot be made by June 30 when the current contract is due to expire then the Turkish number 10 will also be able to leave on a free.

Calhanoglu is now 27 years old and has spent four years at AC Milan after arriving for a reported €23.3m in July 2017. He has made 135 appearances, scoring 22 goals and has helped Milan reach the Champions League this season where he contributed with 10 assists and four goals in 33 Serie A games.  He is also an experienced Turkish international and can score a goal out of nothing.

And if he is for free surely, he would be worth going for right?

So could Arsenal’s fortunes in transfers be turning a corner? Will we really have a team capable of fighting for more than just top four next season?

Well it remains to be seen, but even if half of these reported Arsenal transfer targets are at the club next season, we will surely have a better season then the one we have just had right?