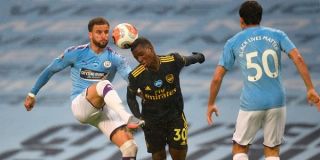 Could Nketiah be set for a return to Leeds permanently?

According to FootballInsider, Leeds United have been offered to re-sign Eddie Nketiah from Arsenal.

The Whites are in the hunt for a back-up to their prolific goalscorer Patrick Bamford, who can provide cover and competition for the Englishman.

A recruitment source has told Football Insider that Arsenal are willing to listen to offers for Nketiah as they look to raise funds for a summer rebuild.

However, it is still to be seen whether Leeds’ coach Marcelo Bielsa wants the young striker to return to the Elland Road.

The 22-year-old striker has just a year left on his current deal at the Emirates, and it doesn’t look like he will be handed new terms.

Thus, a departure this summer seems highly likely. The young Arsenal center-forward spent six months on loan at Leeds in 2019/20 campaign, where he scored five goals and recorded an assist in 19 appearances.

The England U21 international has been linked to various English clubs such as Watford, Brighton and Hove Albion and West Ham United.

It is believed that The Gunners will be willing to offload Nketiah if they receive offers of around €20 million.  The North London outfit will fail to receive the top dollar for their 22-year-old due to his contractual situation.

Handing out a contract extension to Folarin Balogun seemed to be the final nail on the coffin of Nketiah’s career at Arsenal.

The Nketiah-Arsenal chapter feels like it’s coming to an end.