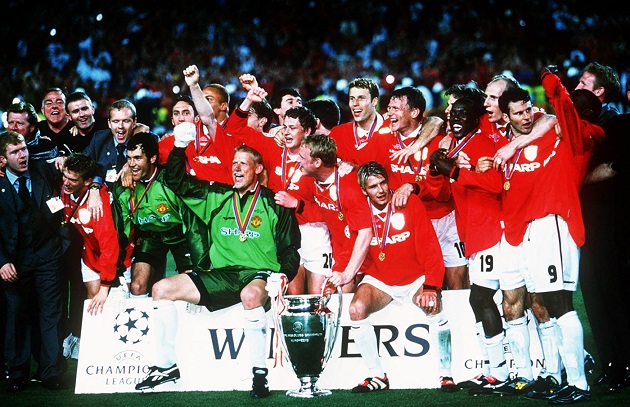 They say you never remember who comes in second. Yet you do feel if Man United had not won the treble, Arsenal would have got more credit for their efforts in the 1998/99 season.

We finished just a point below the Champions and were a 90th minute penalty away from knocking them out of the FA Cup. Given this United side is often described as this country’s greatest, what does it say about us given how close we were?

When people compare rivalries in the modern era, it’s almost insulting to Arsenal at this time. You could argue that this was two clubs at their apex, two managers at their best, so many great players in their prime, in every position you could argue the other had its best. Both played the game the right way but they could fight you as well. They were both so good it got to the point where neither side really liked the other.

At Old Trafford, they didn’t think we were superior despite our Double the year before, and equally we felt unlucky in 1999, for so long their treble could have easily been our Double. It was the classic case of the line between success and failure being a very fine one.

It wasn’t like Arsenal were choking. We lost one of our last 19 games and we ended with the same points that were good enough for the title 12 months previously. The title race was TV gold as both took in turns to wow viewers.

We were scoring 6 at Middlesbrough, 3 at the Lane, Kanu was scoring outrageous goals ….It looked like it was a title winning season.

In what would always be an issue, Arsene Wenger couldn’t compete with Sir Alex in the transfer market. The Red Devils were responding by losing their title with big fees for the likes of Dwight Yorke and Stam, while we paid a fraction of that for Nelson Vivas and Freddie Ljungberg, waiting till February to bring in Kanu.

Given the chances we missed in the summer, you could argue that the eventual points difference would have been made up for if the Nigerian had come in earlier, but equally our boss liked his sports science. In what would become a tradition, a part of our pre-season was put aside for our staff to go on holiday and review what had gone well, areas to work on.

The Frenchman’s ideas were seen as revolutionary with players and bosses on international duty trying to find out his secrets. He put a big emphasis on fitness being at its peak in the second half of campaigns’.

Could it be a coincidence that so much of this season mirrored the previous one? Off the boil before Christmas, before managing a huge winning sequence (we even ended with the same points).
We had six 0-0 draws, so there are moments to look back on and say ‘what if’ but mentally when it counted, they had the edge in key moments.

For two years there wasn’t anything to separate the two, it was always going to come down to the smallest of margins. It wasn’t just Bergkamp failing from the spot that cost us the FA Cup, we played over 45 minutes with them down to 10 men. A week later we put 5 past Wimbledon so it’s not like we fell off the rails, but it was a chance missed to do psychological damage to United.

It’s weird growing up to call this as one of my favourite games as it was so gut wrenching. Yet it had everything and only defeats like this make you appreciate the good times more. We put ourselves in a position where in the final week of the season we were top on goal difference, something else we had clawed back in the run in. An 85th winner at Leeds broke our hearts.

It was a rare time Mr Wenger targeted one of his own players, saying Vivas should have done better at the far post. Others feel we were naive in chasing a winner, with a draw at least meaning United would have to win at Blackburn.

It left us needing to support Spurs for one day, and just for one moment when they scored at Old Trafford, we believed. But like Roy Keane reminded everyone ……”Lads it’s Tottenham!”