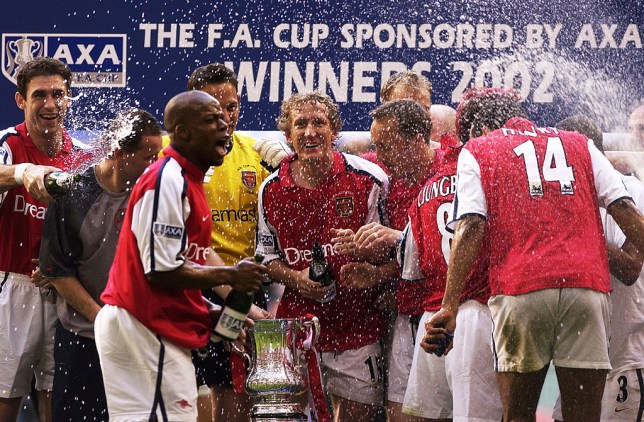 He been linked with a move away before, but we were told throughout the summer it was a case of when and not if Patrick Vieira would be leaving. It had become an annual saga but with the popularity of Sky Sports News giving us Breaking News every day I dreaded putting on the TV or reading the paper. We were constantly told; yes, he’s still officially an Arsenal player; but in reality, talks with Man United and Real Madrid were at an advanced stage.

We read “don’t listen to Arsene Wenger”, who while on holiday could only offer a couple of quotes, basically saying his midfielder would be at Highbury come August. We had statements from Peter Hill-Wood contradicting that, and even the man himself was claiming we couldn’t finish in the top 5 and the current signings had been “hopeful” at best.

Whether they were forcing him to stay, it felt like only our manager and David Dein were the ones who knew the truth. Having lost their best talent in the previous two windows, they simply refused to let it happen again. That’s why we miss Dein. Yes, he was a businessman, but he cared. He was the only guy to ask and trust the gaffer in terms of asking Le Prof what he wanted? This is one of the few times where I truly feel we showed ambition in terms of identifying why we finished so far behind Man United and how to fix those areas. No, we couldn’t match the fees for a Van Nistelroy or Veron, but we were at least trying.

You lack a ‘fox in the box’? Here’s Francis Jeffers.

You want a proven defender in case Adams is injured? How about …….Sol Campbell?????

Yes, we were willing to go head to head with Europe’s finest in terms of wages to sign the free agent. As the days passed it seemed he really was willing to walk away from Spurs to their rivals. In fact, his criteria was simple. He wanted to still live in London, play in the Champions League for the first time and win things…… We were his only choice.

That’s how you convince Vieira to stay. You bring in a World class player who straight away can be one of your main leaders. As a club we don’t do this enough.

Everyone knew how massive it was; a Spurs captain crossing the divide – but in the first North London Derby of the season, Tottenham fans took it too far, holding up signs of ‘Judas’ and attacking the team bus. It says everything about the man that he responded with his best display at that point.

The atmosphere was so toxic I believe this was the moment he became a true Gunner. If that was how he was treated after 10 years of service to the Spuds, then you may just as well embrace your new home.

It’s not lost on me that our policy suddenly was based on bringing in English players, who understood how big we were, to compliment the old back 4 and our academy graduate Ashley Cole. We were now able to hand pick the games Adams could play knowing we could trust a partnership of Keown and Sol.

Meanwhile how Cole and Lauren were being asked to play as full backs was the next process in Mr Wenger’s vision. Cole’s understanding with Pires and Henry on our left was crucial in attack, but we could also fight you when needed.

We knew we had to be better on the road making the manner of our win at Middlesbrough on the opening day huge for our mentally, especially after surviving going down to 10 men.

Yet again you could criticise our card record, but strangely it was a big part of where our self-belief came from.

In my opinion the turning point for this side came in a week where we faced Newcastle and Liverpool, both times with a man disadvantage. Even though the Toon went Top when two decisions went against us, we responded with a heart we didn’t have the year before.

While Henry got criticised for his berating of Graham Poll, it was nice to see how much he cared and we were smart how we used it to create an ‘us against the world’ approach.

At our bogey ground in Merseyside it was assumed we would feel sorry for ourselves when again we were forced to play the majority of a game minus a player. We won 2-1. When Freddie Ljungberg (with his red hair) scored and jumped into the away end it was the perfect Xmas gift, and I knew from that moment we had back what had been missing for years.

We even beat Liverpool in the FA Cup with 9 men. Seriously, I have never seen a team play as well with a player disadvantage more than this version of the Gunners.

At that point it had been a competitive title race with 4 or 5 sides dropping silly points.

Eventually 3 of our keepers would qualify for a medal but while Wright and Taylor did well, mistakes saw us drop points to Blackburn, Spurs and Charlton. Against our title rivals we were decent (6 points over Man Utd, 4 Liverpool, 4 Chelsea, a win at St James Park, a point at Elland Road). It was simply a case of who could put a consistent run together.

Our hopes took a knock when Pires suffered a cruciate ligament injury having performed at a level where he won the Football Writers play of the Year, the highlight chipping the ball over two players heads at Villa Park.

With Henry, by his standards, on a goal drought, we needed a couple of players to step up and get us over the finish line.

Suddenly Fred the Red was in the form of his life, finding the net in 6 of our final 8 fixtures. None of that though would have been possible without Bergkamp, who would spot Freddie’s runs and find a way in with a killer through ball. It got to the point where the opposition knew it was coming but couldn’t stop it. The Dutchman had re-found his mojo scoring 9 more goals than the previous season and 7 more assists.

The final week of the season was strange as they decided to have the Cup Final before our final 2 Premier League fixtures, not after. The players had said in every round how the defeat to Liverpool the year before motivated them to return to Cardiff. In truth we played worse in beating Chelsea 2-0 then we did in losing 2-1 to the Reds.

It was ironic that Parlour (it’s only Parlour) struck near the same time as Ljungberg had 12 months before, but we simply used that pain to make sure we avoided a repeat. Freddie scored in his second consecutive final but this time it mattered, and we left with the Cup.

We then went to Old Trafford only needing a point and knowing we had the insurance policy of Everton at home if we failed. We never once played for the draw and the manner how we controlled the occasion after Wiltord scored showed how far we had come. A team pathetic on their travels 12 months before improved to not losing a single away game, and once we lifted the trophy, we could boast scoring in every single League match.

Sometimes overshadowed by the ‘Invincibles’, but in less than a week we beat Chelsea in the FA Cup Final then took Sir Alex’s title away from him at his own ‘Theatre of Dreams’.

The best 5 days ever?

In addition to winning the League and FA Cup Double, Arsène Wenger was named Barclaycard Manager of the Year and midfielder Freddie Ljungberg received the Barclaycard Player of the Year. Robert Pires was given the Football Writers’ Association Footballer of the Year, while Thierry Henry won the Premier League Golden Boot.