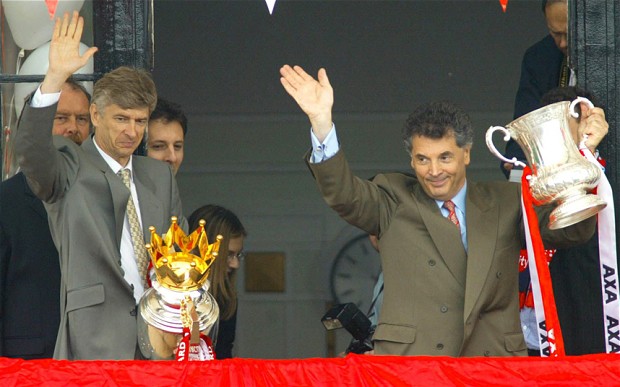 David Dein – Half of Arsenal’s greatest ever double act

They say that successful “double acts” are few and far between, David Dein was one part of the most successful partnership, with Arsene Wenger, our club has ever seen.

It was David who shocked the footballing world when he brought in Arsene Wenger in 1996, having followed his career for a long while.

We all know the years of success that followed this partnership, and I believe that success should be viewed as a 50/50 achievement, both on and off the field.

Basically, it seemed that Arsene told David who he wanted, and it was duly delivered with as little fuss as possible. Life was so simple then, as each trusted the others judgement and knowledge in each other’s field of expertise.

Not only that, the atmosphere around the club, was one of success, togetherness, invincibility, professionalism, organisation, expectation, and a united fan base that knew our club had discovered a kind of football never witnessed before – and we all knew the importance of David Dein in this incredible journey unfolding before our very eyes.

He never courted publicity, but when he did give interviews, he oozed class, intelligence, warmness and a kind of humility that actually seemed to promote him and his work, in a way that made one feel safe and secure regarding our club being in very safe hands.

David was a former co-owner and vice-chairman of The Arsenal Football Club, plus former vice-chairman of the Football Association. He was an Arsenal supporter as well, always recognising the support the fans gave to the club.

With all the positives above, it seems impossible to believe that it was Dein who introduced Kroenke to the club.
The year was 2007 and Dein thought that Kroenke’s money would help build the new stadium and finish the redevelopment of Highbury, so it was arranged that Kroenke bought the shares owned by the Granada Media. It seems that the rest of the board were unaware that this was happening, and it is assumed that this was the start of the division between David and the rest of the board.

What followed with regards to Kroenke is well known, he eventually bought out the club.

But it was David’s long held belief that Wembley was a much better idea for the club, than building a new stadium and he was backed up by the fact that Wembley was always filled when the club decided to play CL games there, in order to maximise gate receipts.

It was at a crucial board meeting in May 2007, when the vote decided in favour of The Emirates, that David was outvoted, and he was then dismissed the following month.

It was also believed, once again by the board, that Dein had gone behind their backs when arranging the sale of shares to Kroenke and they took this opportunity to show their displeasure.

Licking his wounds, David Dein joined forces with Alisher Usmanov and, later, Farhad Moshiri, to form Red and White Holdings, with the aim to buy The Arsenal by the obtaining the shares of board members and other individuals.

It didn’t work out, with the board finally selling all their shares to Kroenke and when Usmanov did the same, David Dein’s hope of returning to the club he loved faded away.

One really surprising fact I found out while doing this research is the fact that in the last fifty years only two shareholders have put money into The Arsenal…David Dein and Granada up to 2016.

David still watches games at The Emirates and is still a passionate Gooner, as anyone who listens to him speaking about our club can obviously hear.

When Arsene Wenger was asked about regrets, he said “Regrets? I’ve had a few and David Dein leaving was one. Ideally, I would have loved to continue working with him”.

I believe that’s a sentiment most Gooners would have loved to have happened and, as I said at the beginning, successful double acts are hard to find.

We had that perfect double act, along with the success – along came Kroenke, who eventually, stabbed both men in the back…my personal opinion of course.

I would love to know how other Gooners feel about David Dein and his legacy, for me it’s yet another example of our club messing up!!!

*Thanks to Andy Kelly, Phil Wall and Mark Andrew for their book entitled “The Arsenal History”, from which I gleaned some of the facts contained in this post.