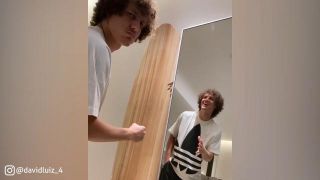 MTV have agreed a special lockdown version of their Cribs TV show, and will be showing the homes of a number of football stars homes in their upcoming series.

The lockdown special will be filmed by the players themselves on a special I-Phone camera rig, using the latest technologies in order to avoid breaching quarantine rules, with the usual commentary from producers and the hosts as if they were with the players in their homes.

David Luiz will likely relish the chance to show off his swanky London home, and will no doubt be showing off his luxury cars also, and you catch the show which will be airing from June 1 on MTV.

The Arsenal midfielder will have to fit the show around his training however, with the Premier League having voted to return to training this week.

Clubs are preparing to increase their training workload in the upcoming weeks as they look to try and return to action in around four weeks time, although doubts have been raised on the timeline set-out for the commence of the Premier League.

Teams haven’t played competitive action in over two months, and haven’t been allowed to train properly in that time either, while Troy Deeney of Watford has refused to return to training in any sense.

Will you be tuning into Cribs to check out Luiz’s home?