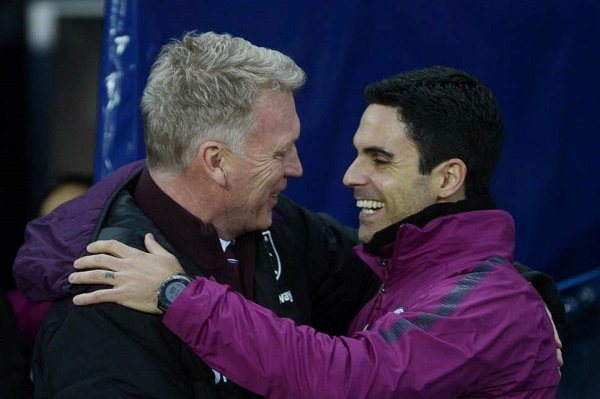 David Moyes on Arteta – Arsenal “are going in the right direction”

David Moyes is a manager that probably knows Mikel Arteta better than anyone, with the Spaniard having played under Moyes for six years at Everton, before being snapped up by Arsene Wenger at Arsenal.

Since becoming Arsenal boss, Arteta has faced his old coach twice, with both games being played at the Emirates and Arsenal winning by a one-goal margin in each match, but this will be Moyes first meeting with Arteta at the London Stadium.

The Scotsman is doing very well with the Hammers this season, but he is aware that Arsenal have been getting better lately and Arteta has done a very good job so far. “I think Arsenal are an improving side and they have shown that in their performances recently.” Moyes told the official West Ham website.

“I think Mikel is building a good team there and I’m sure it’ll be a tough game. They’ll have taken confidence from winning a local derby, but this is our game and we’re interested in West Ham.

“We know Arsenal have got a lot of strengths in how they play and we’ll do our best to nullify them and do our best to put over what we’re good at as well.

“For any young manager to go into a club the stature of Arsenal is a big job and I think there has been so much success spoken about Arsenal over many years, so it was going to be a hard job for anybody.

“The one thing Mikel has got is a great playing experience and he understands the club from that point of view, and he worked under a great manager in Arsene Wenger there.

“He also had the chance to do a couple of years watching Pep Guardiola working at Manchester City, so he had a great opportunity to learn from that, but then he has to go on and become his own person as well.

“I think Arsenal were going to take a little bit of time to develop. I don’t think that was something he could do overnight and change, but I think they’re stating to look as if they’re going in the right direction.

“The one thing you have to say about Mikel is that they won the FA Cup and Community Shield last summer, so what a great start for any young manager to already have two trophies under his belt.
So, he’s had a great start in his early managerial career and I have no doubt he’ll go on and on.

“He was a great player for me as well. I brought him in at Everton and he transformed a lot of things we did. Him and Steven Pienaar made an incredible difference at Everton and Mikel was a big part of that.

“The way we developed Everton over the years, Mikel was really important to it.

“He’ll have seen that, how we had to build teams and find ways of winning in different ways.
Mikel will be moving Arsenal in the right direction and they’re certainly in the quarter-finals of Europa League now and I’m sure he’ll be hoping he can get them better in the league, but I hope we’re able to beat them and they don’t move up the league!”

I know it is going to be tough, especially as Arteta will have to rest a few tired legs, but I am keen to see Arteta’s third win in a row against his old boss, and we move a tiny bit higher up the table…