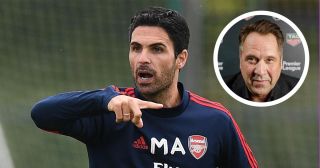 David Seaman has warned Mikel Arteta that he needs to build up confidence in the league, and that concentrating on cup competitions can be detrimental to that.

The Gunners legend enjoyed a number of successful years at the club, despite having to go up against Manchester United who were extremely dominant at the time, and claims the club endured a similar spell just under 30 years ago.

‘Around 1993 we dropped off in the league but in the cups we were doing OK,’ said Seaman. ‘When Arsenal are not challenging it is a bad season and we were well off it — and it wasn’t until Arsene Wenger came in that things started to change.

‘And even then it took two years to win the league and the first Double. It’s maybe like what’s going on now. The team’s focus has changed towards the cups with the league out of reach.

‘But it’s a dangerous game to play if you want to end your bad league form. You can’t just turn it on for the cup. You have to start building confidence in the league or you could be cut adrift.

‘I like what I am seeing so far, the team just needs to be more consistent. We are getting performances and little runs, then we get beat and I think, ‘Really? We got beat by them?’.

‘At that time Man United were on a big run in terms of league titles and that determination to catch them and beat them was growing and growing.

‘But my confidence took a massive hit in that period, from finishing mid-table in the league to losing to Zaragoza in the Cup Winners’ Cup final. And just like throughout my whole career, I always wanted to prove people wrong or shut them up. I always wanted to bounce back.’

It could be debated that Arsenal do not have the same fighting attitude of the players of 93, although Arsene Wenger brought in a number of players who helped to form the team that went onto consistently challenge at the top for a number of years.

It’s weird to imagine that Seaman left the club ahead of our famous Invincibles season, but he was replaced by another leading example in Jens Lehmann.

Arteta does refuse to admit that he prioritises any competitions over the others, but with the different routes into Europe you cannot discount the importance of any competitions, and while we would love to earn Europe through our finishing position, competition is rife for those places.

Would you berate Arteta if we was to finish outside the top six, but he was to win one of the cup competitions again this season?