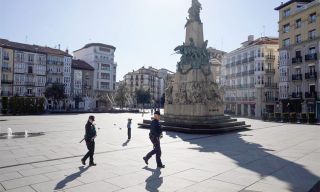 I am watching the coronavirus developments in the UK with great interest, as the government over there are using a very risky “herd immunity” strategy that is completely different to the “keep everyone in isolation” stategy in force here in Spain.

The whole of Spain (like most other European countries) has been in lockdown for a week, even though there was not one death in Andalucia (where I live) up until that time, with most of the cases emanating from Madrid which is over 500 km away. Four weeks ago there had been less than 10 deaths in Spain, today we have passed 1000, with another 1100 in intensive care. This is not “JUST LIKE A FLU”….

If the coronavirus has escalated like wildfire here, despite being in lockdown, I can’t imagine how quick it is going to infect millions in the UK after allowing it to spread freely thanks to the herd immunity strategy used by the Government in the UK. Here is a graph showing how quickly that that has turned into a pandemic in Spain…. 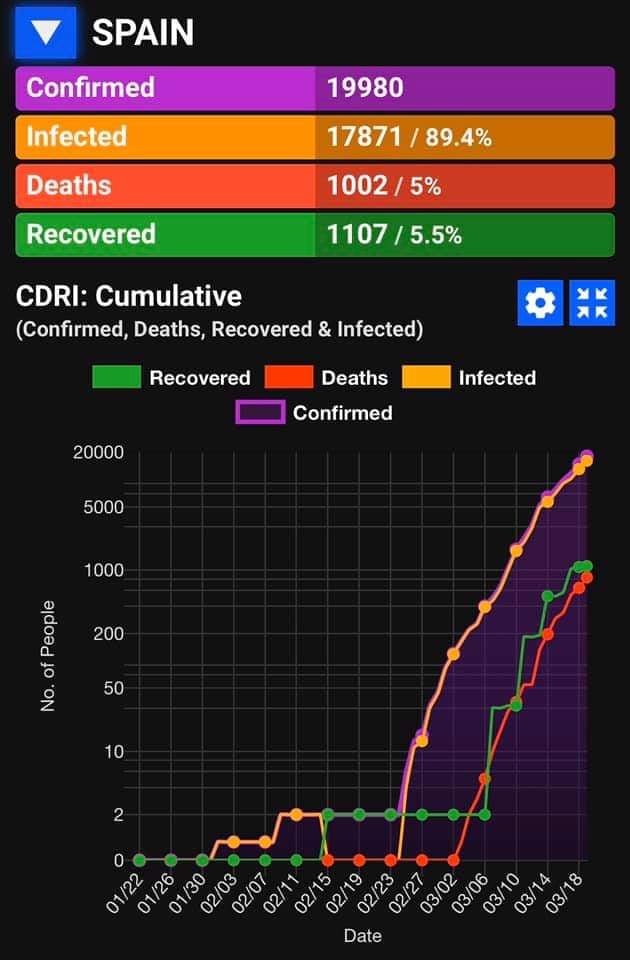 As you can see Spain has the highest percentage of deaths (even more than Italy) at 5% of those confirmed cases, so it is possible the virus is becoming stronger as it spreads or it could be that (like Italy) we have a lot of very old people. I certainly know that if it arrives in my little village up the road then half the town could be wiped out because of the high percentage of aging residents, not to mention all the retired local ex-pats at risk. Many local councils are sending out teams to sterilize bank machines, roads and shop doorways. Any shop workers must wear masks and gloves and keep away from customers.

But despite the rumours that it “only kills the old and infirm”, just a few days ago a 37 year-old Guardia Civil man died of coronavirus in Madrid, and just yesterday we had a baby born in my local hospital to a coronavirus-infected mother and the baby has tested positive as well. We are waiting to find out if it is going to cause the baby any problems. The actual death rate is INCREASING by 33% every day and shows no sign of slowing down. England’s deaths are relatively low at the moment, but I am predicting you will be up to 1000 in a week’s time if you go the same way as Spain, or even quicker as the virus is being encouraged to spread freely. Just think about the fact that our thousand deaths have come from just 20,000 confirmed cases. How many will die when the confirmed cases go over a million. There are 10 million people in London alone, and you still haven’t gone into lockdown.

Now, I don’t know if the UK government have warned the citizens what to expect if total lockdown occurs, but here is a list of what we can actually do at the moment….

*All bars, clubs and restaurants and shops are closed except for from pharmacies, supermarkets, petrol stations and tabacco shops.
*We are not allowed to leave the house unless it’s to do essential work, buy food or an emergency.
*We are not allowed more than 1 person in a car to do any of the above.
*We are only allowed to walk our pets within 50 metres of our house and a quick walk on your own.
*We are not allowed to just take a walk or a bike ride to get fresh air
*All childrens outdoor parks are closed. Beaches are closed.
*At the pharmacy we must stay 2m apart outside door, only one person can enter at a time and only be at least a metre away from the counter
*The majority of us have suddenly found ourselves with no work
*In supermarkets and queues we have to stay in single file with a 2 meter distance between each person. 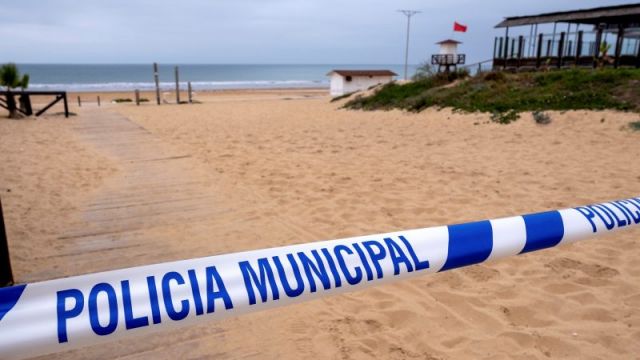 The Spanish government has announced today that they have been lenient with the rules to let the population get used to the lockdown measures. From tomorrow there will be Police and Army checkpoints in towns and roads. Anyone that can’t prove they have a valid reason to be out of the house will be fined. Anyone walking in groups or talking to others in public will be fined. Any car with more than one person in it will be fined. Repeat offenders will be arrested and forced to isolate.

The deputy leader of the Policia Nacional said yesterday: “The first two or three days of the royal decree were a period of adjustment, of warnings and informing people, but we believe that period has come to an end.

“The time has come to implement fully the state of alarm.”

Now it looks to me that the UK government has not put you all in lockdown because they want you to catch it. England has now reached 10,000 cases which ended up as 500 deaths in Spain, and watch those numbers jump higher and higher every single day.

I am just writing this so that the people in England can imagine what they may have to go through in a very short time in the future. I sincerely hope that the UK governments strategy works towards making “the herd” immune to coronavirus, but I am also warning you that the price comes at a very high cost in lives….