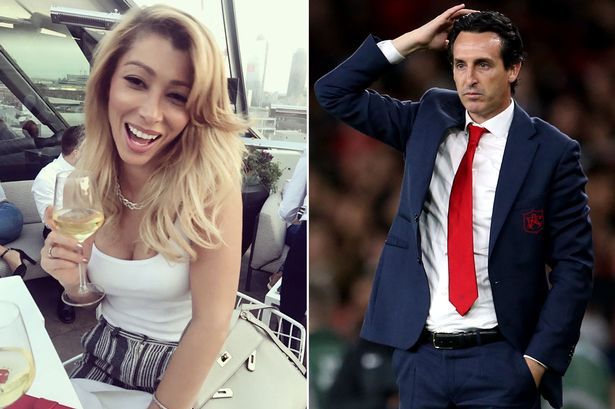 Unai Emery’s ex-girlfriend Sacha Wright for his failings at Arsenal, calling her a ‘white witch’, as their break-up coincided with a losing streak which ultimately cost the Spaniard his job in December.

Sacha has revealed that the former Seville coach just couldn’t be taken seriously in the end, and that she got the blame for the failings at the club.

“It was then that he blamed me for getting him the sack,” she claimed. “He told me I was a white witch as I had brought him so much bad luck.

“He said, ‘It was the day we broke up that we started to lose’.

She jetted out to meet the former Gunners’ boss in December shortly after getting back together, only to be blamed for the failings which ultimately cost him his job.

“I flew out to meet him in San Sebastian just before New Year’s Eve and it was then that he blamed me for Arsenal losing.

“I trusted Unai and really believed we would get married and have kids together one day.

“I thought he was a gentleman and a real family man. But in the end I realised he was not ready for a serious relationship.”

She continued to reveal that while she was committed to a long-term relationship and becoming a family, the difficult relationship just couldn’t head in that direction.

“We would meet up after most games and sometimes during the week too,” she added. “If the team had not been playing well he would tell me, ‘I’m having a tough time. It’s very stressful at the moment’.

“He was always watching football and checking the results.

“He would even lie in bed with one game on his computer and another one on his tablet. This would be in the morning and also right before we went to sleep.

“It was bit annoying but it was his routine and I accepted it.”

As much as there are two sides to every story, this seriously sounds like the former Arsenal coach, who led our side to the Europa League final last term, may have been feeling the pressure of the job.

I’m no psychologist, but trying to label his ex a ‘white witch’ and blaming her for the club’s failings sounds like somebody who needs a reality check.

Unai Emery is currently being linked with the AC Milan job, and this latest story may not portray him in the best light.

Did Emery’s home life affect the team’s performance? Will this story hinder his hopes of a return to action?