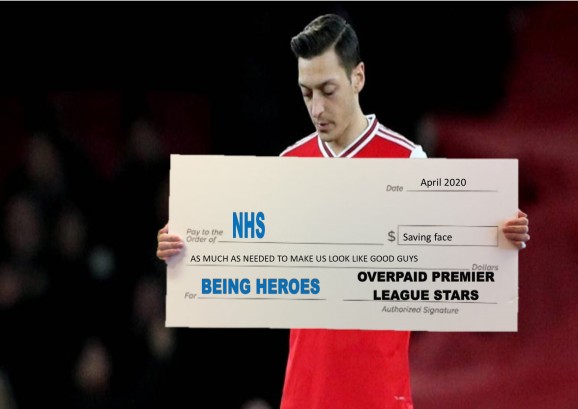 So, the players have decided to put some of their ridiculous earnings into a fund to support the NHS and no doubt they will all be patting themselves on the back.

It is clear their ploy at restoring their battered reputations has worked in some areas but some of us and I would like to think most of us have not been fooled.

The players have in effect said screw the clubs and fans that pay their wages, they want to look good by putting money into NHS charities and leave the clubs to fend for themselves.

You see, the NHS today is funded beyond imagination, the Government is spending literally hundreds of billions, they have made it clear they will do whatever it takes and the NHS will not want for anything and I have yet to find anyone that does not believe them. Sure, some will say they have let the NHS down before and underfunded it and they are right, however, that is not happening today.

The NHS does not need money from players but the players do need the NHS to make themselves look good, to brainwash the naive into thinking they are actually doing a good thing.

No number has been released so as far as anyone is concerned the players may only be putting in 1-2% of their wages, no one really knows. Remember these are people that are under constant investigation for their tax dodging.

For those that cannot be bothered to check out the link to the BBC that outlines the numbers under investigation, it is huge, here are some numbers to get your teeth stuck into.

HM Revenue & Customs (HMRC) is investigating the tax affairs of 330 footballers, 55 clubs and 80 agents, up from 173 players, 40 clubs and 38 agents in January 2019, those numbers are dated from March this year.

All this waffle about why are footballers being picked on and so forth is nothing but a distraction, big business is making a huge effort, certainly far more than footballers.

If anyone did any form of research they would see the massive amount of money and technology the huge corporations are giving, Amazon, Google, Apple, Boots, Four Seasons, Formula one etc have all been doing their bit, whether it is donations to the WHO or providing technology to help the NHS or millions of face masks, properties to use, be it hotels, conference centres etc big business is doing its bit.

The players could save their clubs but they have chosen not to. Think about that for a minute, think about it when the clubs go under.

The players, mainly Premier League and mainly the top six have shown themselves to be contemptible people that have abused and continue to abuse the clubs that employ them and the fans that idolise them and this attempt at good PR by donating as little as they probably can to the NHS that simply does not require the money right now is all about the players and not about helping the community they leach off.

No doubt their defenders will trot out all the usual stuff but for me and quite a few fans, I would say the vast majority, will not be fooled by their latest antics.

They have not done a good thing, they have made sure they have taken care of their own image first and foremost, such a shame that some have actually been taken in my their bull.

Start to say goodbye to football clubs but that’s ok, as long as the millionaires get yet another Ferrari or open up a new fashion label or coffee shop then its all good.