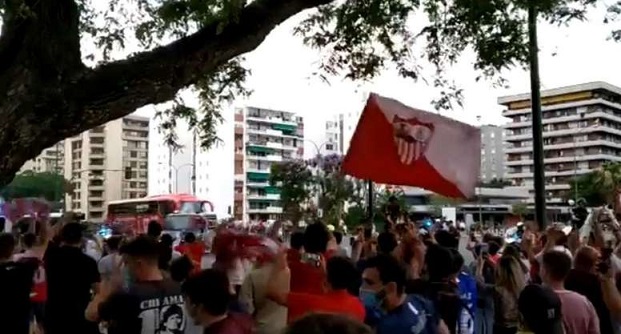 Do you still think football fans can be trusted to stay away from matches?

Three weeks ago, the Footballer Supporters Association stressed that the Bundesliga proved that football fans could be trusted to stay away from stadiums.

That same body has now gone quiet, after hundreds broke social distancing rules in Spain last night. Last week in Coventry, hundreds of football fans swamped the city centre to celebrate the club’s return to the Championship, and they team weren’t even playing!

Originally this is why the Premiership wanted to use neutral venues, to avoid mass gatherings. The League was accused of stereotyping supporters with the notion that they couldn’t follow simple rules.

I long compared the government’s regulations as the movie the Terminal. They couldn’t legally tell Tom Hanks he could leave the airport, but they were not going to waste their time if he did.

So, in this instance, to tick a Health and Safety box, they have to tell you not to hover round stadiums but as proved in Sevilla and Coventry, the police are not going to stop you. The second an inch was given in Lockdown restrictions being lifted; a mile was taken. 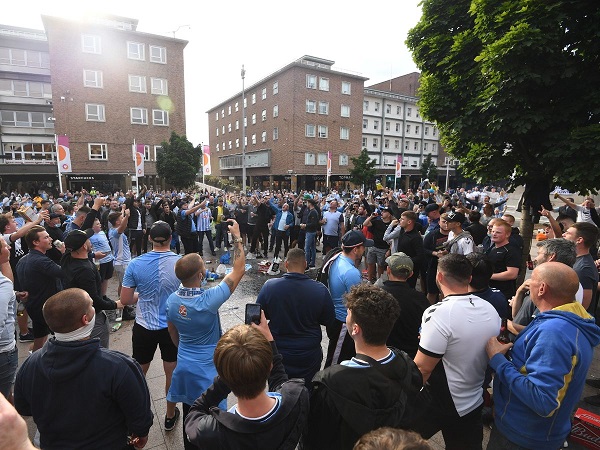 People have found loopholes to justify to themselves why they can do what they want while other families suffer from this virus.

Being allowed to meet up with your loved ones outside at 2 metres apart, was translated as ‘let’s join thousands on a beach’.

There is no legislation that says a protest gives you the right to break the law. At a time where I can’t travel to England, groups can tear down statues while authorities watch? It will only get worse when shops are reopened, another step in people believing they can act how they want.

The counter argument is the death toll is dropping. Yet think how sick a statement that is? You choose to break rules because in your head you reached a number of deaths that are acceptable to you? One death is one too many if it can be avoided.
Imagine if you caught the virus because you HAD to go to the beach, that is the difference between being healthy or not, or passing it on to a loved one.

I’m happy Arsenal are back playing but I also have other factors in my life. I want to be allowed to travel to see my niece and nephew for the first time? I have family in ill health abroad who want to fly over and be with family. So, every time I see someone do something senseless, I look at it as just slowing everything down. We were assured that the return of football would not slow that down. Clubs insisted that football fans could be trusted.

How is it right that I can’t see my family, but people can hover outside a stadium for no reason? Or at least if they are not going to be arrested then let me travel. Me driving from Wales to England to stay in my brother’s house is not allowed, but thousands can stand outside a stadium smiling?

I’ll be very interested to see if La Liga do anything about last night’s gathering. Surely fans have been given a chance and proven on the first night they can’t be trusted? Surely now for public’s safety you have an emergency meeting and go back to neutral venues? That of course will upset sponsors and TV companies. It stinks.

Next Sunday Liverpool could be champions. You really think the night they are playing Everton supporters can be trusted to stay at home? They are watching thousands on beaches, marching through London ……so where’s the deterrent? Where’s the ….’If I do something I’m not allowed to do, this is my consequence.’

So, if the Reds win a first title in 30 years, Villa stay up with a 90th minute winner, we win the FA Cup, etc; Are football fans going to do as they are told knowing there are zero repercussions?

If one person gets the virus because of crowds outside stadiums. That’s one too many.