DONE DEAL and Arsenal will make just ONE more transfer

There was a suggestion from Arsene Wenger that the Arsenal squad named to face Manchester City in the Premier League on Saturday could include the name of the young Polish midfielder Krystian Bielik, who was supposedly in London to have his Arsenal medical at the end of last week.

The 17-year old did not appear in the squad, but any concerns that anything was stopping his transfer from Legia Warsaw being completed was proven false earlier today as Arsenal.com confirmed that the move was complete and included the first pictures of the promising player, who has been compared to our former captain Patrick Vieira, in his snazzy new Arsenal kit. 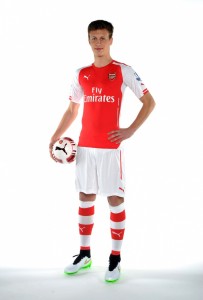 And despite the versatile 6ft 2in teenager being able to play at centre back as well as central midfield, I do not expect to see much of him this season. He may get the odd appearance but Bielik is one for the future and he is not the reason I think the manager will only complete one more bit of business in the January transfer window. That will be for a central defender and do not be surprised if we have to wait until transfer deadline day to find out who.

We may not be entirely happy about this, but I really believe the form of Francis Coquelin will have convinced Wenger that he can wait until the summer to get the top class midfielder the Gunners need. Mikel Arteta will apparently be back at the end of February and we already have Mathieu Flamini back in the squad. And with Jack Wilshere back in training, the boss will not feel the need to bring in cover for the sake of it, especially as the likes of Schneiderlin will be available in the summer.

This is not really about money, Gooners, because Coquelin needs to keep playing now things have clicked for him. And if we signed someone now, it could adversely affect the young Frenchman’s progress and confidence. What do you think?