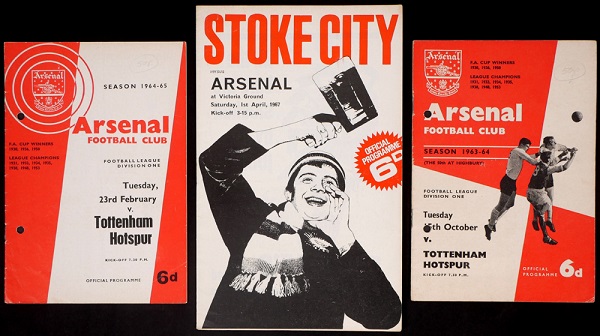 Down Memory Lane including away days with the Arsenal Supporters Club

Nostalgia Part Two, including away days with the Supporters Club by Jon Fox

Many Gooners will know about, or even be members, of the Arsenal Supporters Club. I joined this club whilst still at school way back in 1964. Club night was Tuesday Evenings – it may still be so, but I have not been there for a few years now. It is in a large house on the corner of St. Thomas’s Rd and mere yards away from our old stadium, and still of course just a minutes fast walk from the new one. Starting in 1949, the Arsenal Supporters Club members were numbered consecutively, and I was member number 7000 and something. In latter years the house was extended, and a still popular bar was installed where fans flock to before and after matches.

They used to run coaches to away trips from Highbury Corner and may well still do -though I am well out of the loop these days. In those days we could get to the West Midland games for 10 shillings return fare! I kid you not! The Northern trips ranged up to around 15 or 16 shillings from memory. For Newcastle and Sunderland we used to travel overnight,leaving Highbury around 10.30 PM. Usually there would be a few coaches, two, three or occasionally four, and we had rude singalongs quite regularly. Being a “good little boy” but quite grown up nevertheless for my then tender age, I used to listen to the words, usually involving Roedean School, a Girls school, of course, and a pupil named Dinah! For reasons of taste which I eventually achieved, though rather later in life, I must leave the rest to your imagination!

There were several well-known and popular characters who used to travel, and some were stalwart members of the Arsenal Supporters Club, including Barry Baker, widely known as Joe Baker, after our star centre forward of that time. They were not called strikers back then, and true strikers were what Union members used to be, never footballers. Barry in time became the club secretary and I much hope he is still around. Another regular traveller was Old Flo Burgess. She was an Arsenal nut and a pensioner. For home games, she would always stand right behind the North Bank goal and she knew all the players. She used to shriek “Jiiimmmmy” at Jim Furnell, our keeper, during the warm-up prior to kick off and he would turn around and wave and she would throw him a toffee or some other sweet. All we regulars knew and liked her and when, later on she was in hospital, our then manager Bertie Mee, together with a posse of players went to visit her there. She knew all the players’ birthdays and used to send cards via the club. Old Flo would even join in the football kickarounds we youngsters would organise on the motorway service stops and also on Blackpool beach on at least one occasion. Whenever we played at Blackpool the tide was always out. How did it know we were coming? Easy! God is a Gooner, though I do wish he would hurry up and answer my regular prayers to rid us all of Kroenke!

One time we had travelled to Sunderland and the snow was thick- no prior media info back then about whether or not the game was on. We met Billy Wright, our manager, with some players in the town and ended up doing our best to clear snow from the pitch but to no avail and the game was postponed quite close to scheduled kick off. Undaunted, we ended up at the local Bowling alley, wet and bedraggled, and I vividly remember one chap entering the ladies loo by mistake and the expression on his face was a picture as he came out and saw us all laughing. Ah, happy days!

Other memories are of going to Belle Vue, after Man Utd games, and catcalling at the wrestlers shouting “fake” and such-like and being hurriedly thrown out. Also, of raucous boozy evenings spent with Newcastle and Sunderland supporters’ clubs after the games which, at least at Newcastle, we always seemed to lose. On another occasion, not with the Arsenal Supporters Club, I went by train and we lost 2-1. On the same train back home and no later than 6.pm either, at the train bar was a half-sloshed George Graham saying tipsily to Colin Addison, another forward, “It wasn’t a penalty” and his words were already slightly slurred. We fans were hurried through to the next carriage and we saw whole the team in the adjoining carriage with no less than Bob Wilson – my all-time Arsenal hero, whom I simply “worship” for his bravery and sheer humanity – laying the law down to Radford and Sammels across the train table. We fans tried to linger but were hurried through.

In part three of my Nostalgia articles I will tell of how we met the great Brian Clough in 1972 and of other memories that I will always treasure, including my long list of bogus names for our “esteemed friends”, ahem, at Tottenham!