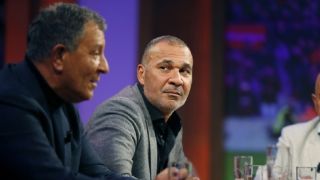 Ruud Gullit has come in with a scathing attack on Arsenal’s current easy-target, describing David Luiz as overrated.

The Gunners defender was at fault for the opening goal against Manchester City last Wednesday, before getting himself a red card and giving away a penalty after only 25 minutes on the field, leaving his side destined for defeat.

There is much speculation around Luiz’s future at present, with his current deal set to expire at the end of the month, and no new deal has been announced as of yet.

Ruud Gullit is shocked that he keeps getting the gigs however, claiming he is overrated, and surprisingly keeps getting signed despite clubs offloading him..

‘I think he’s an overrated player, really. When he played in midfield I thought he was reasonable, but then there was already discussion about what he actually is as a player.

‘But he preferred to play as a defender… Well, we all remember the match between Brazil and Germany (7-1 at the 2014 World Cup). I just can’t understand it!

‘Most clubs have done away with him, but he keeps coming back somewhere.’

A number of coaches have failed to work well with the Brazilian, but Mikel Arteta did appear to be getting the right tune out of Luiz after joining in December, but unfortunately he always has performances like that against Man City in his locker.

Will Arsenal be forced to consider extending Luiz’s contract due to a growing list of injured options at the back? Can we afford to lose him this month with the remainder of the campaign still to play?