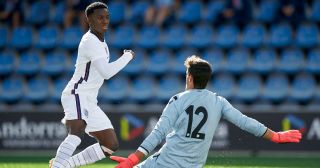 Eddie Nketiah claims ‘this is a big year’ in his career

Arsenal’s Eddie Nketiah has spoken to Alan Shearer after breaking his record as all-time goalscorer for the England Under-21 side, and claims this is a big season in his career.

The 21 year-old broke the record last month, taking his tally to 16 goals for the Under-21 side, but is yet to make a big impact for his club as of yet.

Nketiah has picked up 14 appearances this term, scoring three times, but did impress the manager last season, and was on the verge of sharing the central striker role with Alexandre Lacazette.

This season he has fallen behind the Frenchman however, but Nketiah is still picking up plenty of minutes off the bench and remains confident that this will be a huge season.

“It was a big boost, definitely,” Nketiah told Alan Shearer at TheAthletic, when asked how he felt when Arteta told him he was to play for Arsenal and not leave on another loan in January. “It was nice to feel wanted, that I had a role to play at the club. There were quite a few offers for me to go out again, but the manager wanted to give me that chance.

“That gave me the confidence that I’m good enough to play here. I’m very grateful he stuck to his word. At the end of last season, I think you could see me growing with every performance. This is a big year for me, to get more starts and show what I can do. I believe in my ability and know that if I keep working hard I’ll be able to transform all the things I’ve done at youth level and the glimpses I’ve shown at professional level on a regular basis for Arsenal.”

Eddie hasn’t enjoyed as much playing time as he did late into last term, but he hasn’t overly impressed when coming off the bench either, and whether the lack of minutes has affected his form or not I do not know.

Nketiah will need to add more goals to his game if he is going to overthrow Lacazette in the first-team.

Do you believe he has what it takes to be a regular first-team striker at Arsenal?