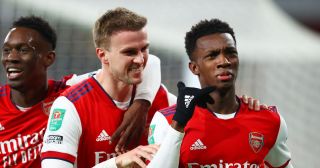 Eddie Nketiah’s senior debut for Arsenal was eagerly awaited as we all knew that he was scoring goals for fun for the U23s and the England youth sides.

But when he finally played it was as a late sub in a League Cup game against Norwich back in 2017, when we were 1-0 down. Eddie not only scored the goal that sent us into extra time, but then he went on to score the winning goal in the end.

He hasn’t really carried his prolific scoring into the Premier League as yet, but he scored against Leeds to set us up for the game against Sunderland, and he duly scored a hat-trick on Tuesday, which means his record in the League Cup is now eight in seven appearances.

Without any European games this season, the League Cup has so far been the only outlet for our fringe players to get some game time, and Eddie believes that has made our reserves hungry to impress in this competition. Eddie said: “Yes definitely. We are Arsenal Football Club so every competition is one we want to compete in and try to win.

“But yes without European football this season, the games don’t come around as quickly, so all of us – when we get an opportunity to play – we are all eager and hungry to make sure we show our worth and try to make the difference. I think we have all done that so far.”

As Arsenal have not won the League Cup in many many years, I am sure Arteta will be very keen to get that Cup under his belt, but I am also sure that he will play Nketiah and Co again in the semi’s against Liverpool.

Who would bet against Eddie scoring again in those games?