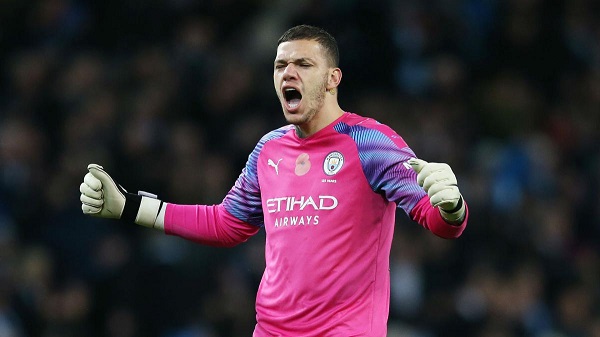 Ederson to face Arsenal instead of Bravo, relax we can still beat City

Arsenal takes on Manchester City in the FA Cup semifinals today with the Gunners hoping to earn another impressive win after beating Liverpool 2-1 in their last game.

Manchester City is one of the best teams in Europe and the Citizens have quality all around their squad.

When they play in the domestic cup competitions, Pep Guardiola uses former Barcelona goalkeeper, Claudio Bravo. However, ahead of their FA Cup semifinal against the Gunners, the Chilean is injured and Guardiola has confirmed that Ederson will be between the sticks instead.

Guardiola said via Sun Sport: “Eddie is going to play because Claudio is a little bit injured.

“He was not on the bench for the last games because he has a muscular problem and he’s not able to play on Saturday.”

This means that Arsenal will be facing a significantly stronger side as they had also rested Kevin De Bruyne in their last game.

Arsenal, however, need not fear that we would lose this game and I say that is a huge measure of confidence.

We are coming into this game after beating the best team in the league, Liverpool, and they had their first-choice goalkeeper in goal for that game.

What we need to do is maintain the level of pressing and the aggression that we showed against Liverpool and even Manchester City will crumble.

Ederson has also proven to be a goalkeeper with a few weaknesses. If we pay good attention, we can exploit those and score some goals.