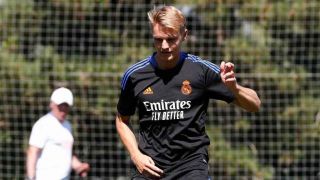 Martin Odegaard is claimed to be keen on making a return to Arsenal this summer, with Real Madrid’s asking price revealed.

ESPN insists that while the Galacticos remain keen on keeping the Norwegian going into the new season, it is known that he is favouring a return to North London.

Odegaard enjoyed an impressive loan spell with the Premier League club after joining in January, becoming a first-team regular under Mikel Arteta, before returning to the Spanish capital ahead of the pre-season.

It has largely been reported that he remained high on Arsenal’s wishlist in the current window, and the 23 year-old is claimed to be eager to make the return.

Real are not interested in another loan deal however as they don’t believe they would be able to find a replacement with their current budget, but would be willing to accept €50 Million for his signature if he continues to favour such a move.

It remains to be seen whether Arsenal would be willing to meet his asking price, but the club does appear willing to spend this summer thus far, and with the outgoings expected in the coming weeks also, we could well be able to cover such a fee with our own sales.

Will Arsenal still have the funds available to sign Odegaard after they close out White’s signature? Or could they have to raise the funds via our own transfer activity?

Odegaard speaks up on Arsenal’s All or Nothing cameras being everywhere
31 August 2021, 22:00