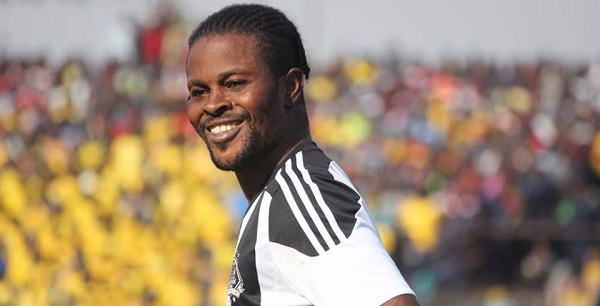 Ex-Arsenal trialist discloses why his 2007 move fell through

DR Congo star, Trésor Mputu could have been an Arsenal player had things turn out differently.

After landing Kolo Toure straight from the African continent with some measure of success, Arsenal offered the then TP Mazembe hotshot, Mputu a trial.

The youngster impressed the club coaches and he would have been given a contract, however, for some reason he returned to his club with no deal and he would spend a majority of his career at the Congolese side.

He recently took to Instagram live to try to explain why the deal didn’t go through, although he had impressed Arsenal’s coaches.

He claimed that he had trained with Arsenal and that the club’s coaches liked his performances.

However, the Gunners struggled to reach an agreement with his team back home because they tried to sign him for a small fee given that he wasn’t playing for any top European side at the time.

His club president then asked for him to return to his country. He revealed that it was later that Wenger explained what had happened to him.

He said as quoted by La Prosperite: “I’d spent two months in London training with Arsenal alongside Adebayor and many others, and they rated me. Then, the president [of TP Mazembe], Moïse Katumbi, came to discuss with the English club’s board, and he went back immediately.

“I wasn’t told what they had spoken about. It’s only later that I learned Arsenal didn’t try and pay a lot. Arsène Wenger called me, confirming this information, to tell me that if a player comes from Africa, you always buy him for less and then percentages make it up afterwards. The next day, Mazembe’s accountant would tell me that the president said we needed to go back”.