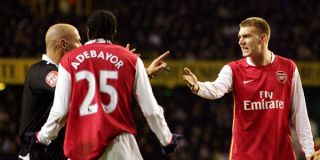 Nicklas Bendtner has revealed that Emmanuel Adebayor was the only player he didn’t get along with at the Emirates.

The Dane was one of the most divisive players at the club when he played for them and even fell out with Thierry Henry during his time at the club.

However, he has revealed that Adebayor, whom he had a very public falling out with in a game against Tottenham, was the only player that he really didn’t get along with during his time at the club.

The two players were Arsenal’s strikers between 2006 and 2009 and they were used together on a number of occasions.

Being strikers, you would think that they had a very good relationship which would have helped them on the field.

But the Dane has revealed that Adebayor was the only player that he didn’t get along with because both of them didn’t like each other.

Apart from that, he claimed that he got on well with other members of the Arsenal team during his time there.

He told Talksport: “There is only one guy I’ve fallen out with and that’s Adebayor. We never liked each other. Apart from that I got on with most people.

“We sat next to each other in the changing room. He was 25, I was 26, from the first moment we saw each other it was just a bad vibe. That never changed.”

Partey was urged by unlikely source to snub Man United for Arsenal
16 November 2020, 11:45