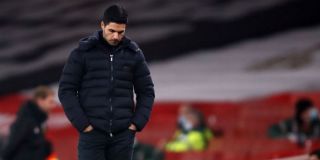 Arsenal’s poor run of form in the league this season shouldn’t be blamed on Mikel Arteta only, that is what Jens Lehmann thinks.

Arsenal has endured a torrid time in the Premier League this season and their poor run of form sees them head into the game against Burnley this weekend 15th on the league table.

The Gunners had started the campaign by beating Liverpool in the Community Shield after winning the FA Cup in the previous campaign.

Arteta masterminded those two trophy successes, and the Spaniard was seen as the messiah that the club had been looking for.

Now that their season has begun unravelling, he is also bearing the brunt of the criticism with his tactics and team selections getting blamed for the reason why Arsenal isn’t doing well at the moment.

Lehmann, however, thinks that the blame should be shared judiciously such that even the players and the club’s hierarchy can take some for their role in the current mess.

When asked who should shoulder the responsibility, Lehmann replied to the Daily Mail: ‘Well it is a bit of a mixture.

‘The players are in a fantastic environment, they are in London at one of the most traditional clubs.

‘It seems that some of them are still having problems to cope with the pressure because everybody expects them to win something.

‘But we are not even talking about winning anymore when you speak of Arsenal. There are a lot of problems.’