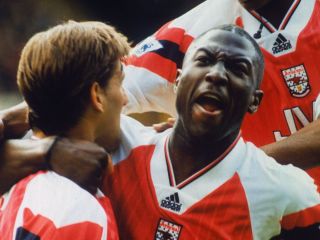 Kevin Campbell claims that Manor Solomon is an exciting prospect as he is linked with a move to Arsenal, and claims that the next transfer window will be one of the most important we’ve had in years.

The forward has admitted this week that he has held talks over a potential move to England, with a number of clubs said to have been of interest to him.

Solomon told Israeli reporters Sport5 (via Goal) the above, as well as admitted that it his ‘dream’ to play in the Premier League, and our club is the most strongly linked with his signature.

There will of course be plenty of Arsenal Transfer News come the summer, and while Kevin Campbell admits that he is excited by the prospect of seeing Solomon at the club, he expects this summer to be one of the most important in years.

“He sounds exciting,” he told FootballInsider247.

“I have seen little bits of him and I like what I see.

“The key is – can he do it in the Premier League? If they sign him they will obviously believe that he can.

“This is the most important summer for Arsenal in 15 years when you consider the people he got out of the club in January.

“The rebuild really starts this summer. It is all about getting the correct pieces for the slots.”

We appeared to do some incredible ground work this season in the transfer windows, moving on some of the surplus and bringing in some real talents, and I can’t help but agree with Campbell that this summer should bring even more of what we need, and hopefully our squad will start to look like one that is worth challenging for the top spots.