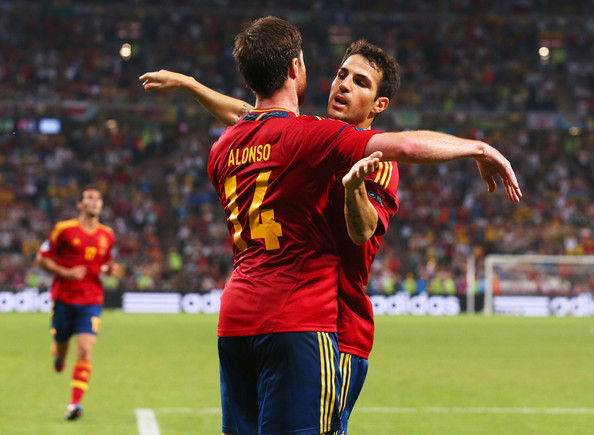 Fabregas: Arsenal disappointed me by dropping ball on key signing

Arsenal were in talks to sign Xabi Alonso from Liverpool in 2009, but failed to meet the asking price of our rivals.

The general reports claim that Liverpool had supposedly wanted £18 Million to allow the Spanish midfielder to leave the club, with us supposedly only will to pay a fee of £15 Million.

Cesc Fabregas now reveals that the future World Cup winner was desperate to join Arsenal so much, that the pair were messaging daily in as they worked to try and find a way to play together at the Emirates.

‘He was dying to come. He was literally begging everyone to go to Arsenal, he really wanted to come. And to be honest, I did my best. I spoke to who I had to speak to. I gave my opinion, I thought that he was a fantastic addition for us at that time,” Fabregas revealed.

“And yeah I have to say that a couple of times like that I was frustrated by the lack of push, the final push – you know what I mean? That it’s so close, the player is dying to come, it’s so easy to make this deal.

‘I am not a director, I see it from a player’s point of view. If it was me, if I wanted to go somewhere like I went to Arsenal, I do my everything to go to Arsenal. And I see that when a player wants to go somewhere, it’s easy. Forget contracts. Okay, sometimes it’s more difficult, if you have a long contract or something, but normally it should happen. And yeah, Xabi Alonso was one of them. I mean I was living it day-to-day because he was texting me all the time.

‘I remember the whole holiday I was talking to him, he was texting me: “What’s happening?” And it was a shame, because I think he would have been a great, great, great addition to that team. He was made for Arsenal, I think.’

Alonso eventually ended up moving to Real Madrid later in the summer, and played a key role in winning the World Cup in 2010, followed by Euro 2012 with Spain, as well as helping his club to win a number of trophies, and earning many personal accolades after this move also.

This must be one of the worst decisions that has been made by the club over the years, and this decision most likely showed Fabregas a lack of ambition at the club to succeed, which eventually saw our club captain push to leave the club.

Would Alonso have helped us challenge the Premier League titles in 2009-10 onwards? Would his arrival have appeased Cesc’s desire to leave?