The Dutchman moved to United last summer from Ajax and Arsenal was one of the clubs that wanted to sign him when he was with the Dutchmen.

He has been struggling for playing time at United since he joined them and he could change clubs this summer.

Arsenal has been rumoured to be interested as the Gunners look to add new players to their squad this summer.

After losing Martin Odegaard and Dani Ceballos, they have been tipped to sign new midfielders for their squad this summer and van de Beek might be a useful squad member to have.

However, Romano was speaking on his Here We Go Podcast recently and the Italian journalist made it clear that Arsenal has no interest in the Manchester United flop at the moment.

He said: “Rumours about Arsenal are not true, he is not going to Arsenal.”

Van de Beek has seen his stock fall sharply during his time at United. 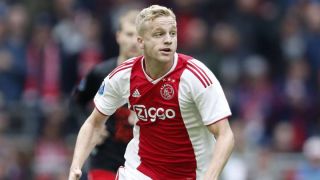 Ian Wright discusses one player that should have joined Arsenal and not a rival
25 September 2020, 18:30