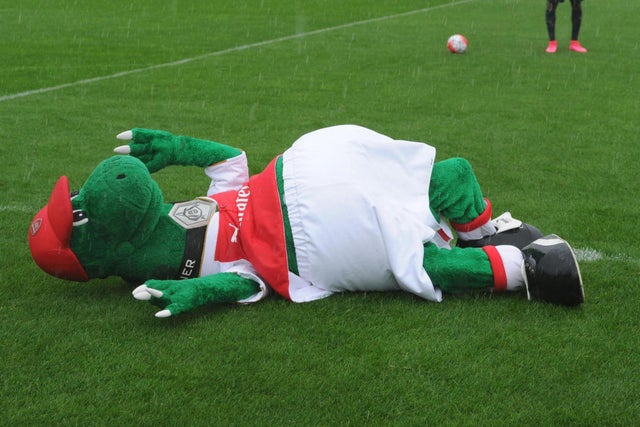 Reported this week was the letting go of long-time mascot actor Jerry Quy, who for twenty-seven years brought fans the character of the Arsenal award-winning mascot Gunnersaurus. The Gunners’ management have stated that the extinction was a cost-cutting measure, an attitude which has brought both the disappointment of fans and the taunting of rival Chelsea club members.

Jerry Quy has assumed the role of the dinosaur mascot since 1993, and is a life-long Arsenal die-hard. With empty stadiums remaining the norm during the pandemic crisis, it was decided there was not space in an already laboured budget for the luxury of the character. However, it has been reported the mascot will return once spectators are allowed to return to the stadium.

“Gunnersaurus has been the Arsenal club mascot for 27 years. He’s a club icon and we cannot let him become extinct,” a statement on the GoFundMe page to save Gunnersaurus says. The page, created by George Allen, has already raised £11,452.

Former Arsenal club stars such as Ian Wright and Paul Merson have publicly indicated their disagreement with the measure, and Chelsea striker Michy Batshuayi has posted a photograph of himself together with Belgium’s Red Devil, captioning it: “And this is how you treat your team mascot.”

With an FA Cup title under their belt, Arsenal have their sights set high. However, these ambitions have led to what loyal fans see as absurd budget politics. While the club announced it expected to cut fifty-five jobs due to the damage the coronavirus has had on club finances, specifically related to sponsorship and broadcasting, the extinction of the beloved mascot came on the same day as pivotal player signings.

Thomas Partey, long rumoured to be joining the Gunners as the transfer window came to a close, has come with a price tag of a whopping £45.3m transfer fee to Atletico Madrid. Whether this investment will result in a spike in favourability among analysts and bookmakers remains to be seen, but at present a significant contingent of Arsenal’s fandom are questioning their decisions.

This was not a good PR move by Arsenal at all…