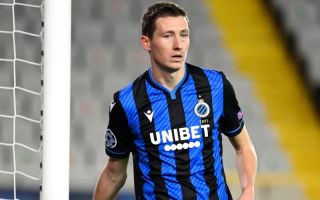 Hans Vanaken’s father says they are open to offers from Arsenal and other top clubs as the 29-year-old shows incredible form in Europe and the Belgian Pro League.

Vanaken has been at Club Brugge since 2015 and he has turned himself into a cult hero at the Belgian club.

He has repeatedly been linked with a move to a major European league, but nothing has happened as of yet but he could achieve a move now.

He is a star of the Brugge side that has won the last two Belgian league titles and he is impressing for them in the current Champions League.

His form has caught the attention of several top clubs and his father has now revealed that they are open to offers from abroad for the attacking midfielder.

Speaking about his son’s future in a recent interview, Vital Vanaken says if he has a good year and wins another Golden Boot, he would probably get a move abroad and names Arsenal as one of the clubs they hope will come for him.

“Hans played one of his best halves ever,” he told HLN Sportcast.

“The national team has given him an extra boost, and we really enjoy seeing Hans play like that. How we celebrated the win? We had gin-tonics.

“One more top year with Club, maybe a third Golden Shoe, and then a top transfer. Arsenal, Tottenham, let those teams come!

“Me giving him a push? No. I have two children, and the most important thing is that they are happy. Then the rest comes.”